I’m trying to gather info on working extension cable solutions for the Pimax 8KX (this is primarily for the X but should also work for the other headsets though going fiber optic on short runs (5m) isn’t necessary for the 5K+/8K/Artisan).

In general, the DisplayPort cables have to support the following standards/specs to work on the 8KX:

Some have had luck with Club3D 2 or even 3 meter extension cables but it seems not all GPU’s provide sufficient signal strength. You have been warned…

USB cables have to be USB 3.0 for the blue/thick cable and if You want more than 3m extension it should be a powered cable (or a “repeater” cable).

For the black/thin cable any USB 2.0 cable would probably suffice as it’s only used for (extra) power.
You could also just plug the USB 2 cable into a power brick nearer Your play space if possible (and extend from the wall outlet instead if needed).

Using a fiber optic cable prevents signal degradation and noise as it transmits using light instead of electrical signals. The downsides are that they are prone to breaking (don’t bend them too much) and they are expensive. 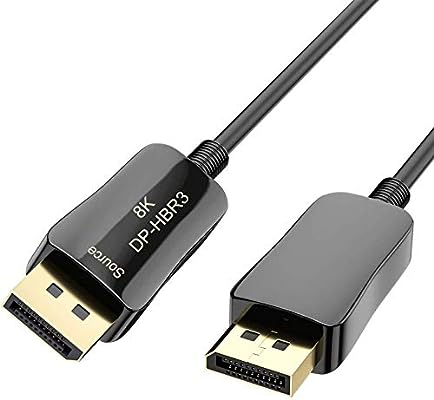 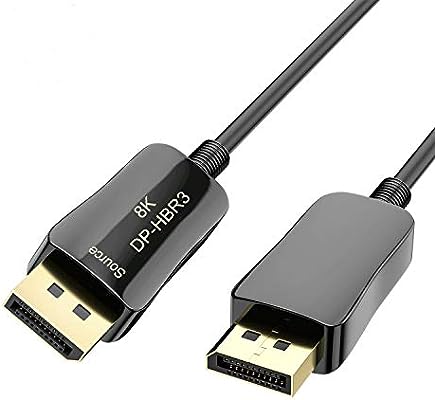 
Will be tested by @DrWilken coupled with Cable Matters Repeater linked below.
UPDATE: Did NOT work with the Cable Matters repeater for the 8KX but worked fine for the 5K+ so probably a bandwidth or feature issue with the repeater.
UPDATE2: Works with the “Lindy 38415 DP Repeater”…

Can likely be used with fiber optic cables as there’s no need for amplification. Most likely won’t work on passive cables.

Amplifies or restores the signal strength. Should work with fiber optic cables but might be unnecessary/overkill. 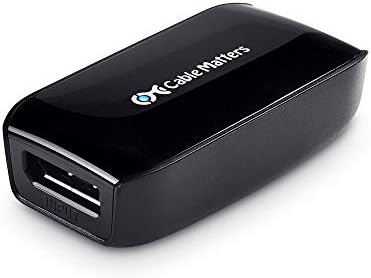 
Will be tested by @DrWilken with the “YIWENTEC Fiber Optic” cable linked above.
UPDATE: Did not work with the YIWENTEC cable for the 8KX but works fine with a 5K+. Not recommended for the 8KX.

These may or may not work for You as they’re passive cables and You’re at the limit of the DP specs.

2m extension (bigger chances of it working than 3m): 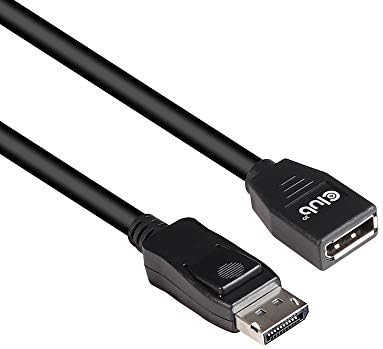 
3m extension (less chance of it working due to signal degradation/noise):
https://www.amazon.com/Club-3D-DisplayPort-Extension-bi-Directional/dp/B081D38N65

I only tested a few passive cables with the Lindy 38415 Repeater and 5 meter passive cables didn't work but if 3m is enough for You I would think any good quality DisplayPort cable at 3m length would work as long as it's coupled with the repeater.

The following cable has been verified working: 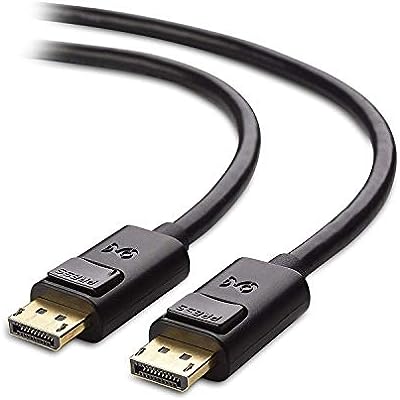 Basically, any good quality USB 3.0 extension cable should work for the USB3 (blue) port (if it’s more than 3 meters go with an active one - i.e. a repeater cable).

For the USB 2.0 port You can easily use 5m passive cables, but if You’re extending more than that go with an active/repeater (USB 2.0/3.0) cable instead or using an extension cord from Your wall socket and a generic USB charger/brick.

As posted in my other topic about Beat Saber settings, having received my 8KX earlier this week, I am able to use it in native mode using a 10m displayport extension as well as a 10m usb extension. The specific DP I bought is no longer on amazon but the details are as follows: UGREEN Displayport 1.4 Cable, Fiber Optic DP to DP Cable 10m, purchased February 2019 on Amazon UK [image] along with a displayport coupler: and this USB extension: https://www.amazon.co.uk/dp/B01FQ88CHS/ref=pe_3187…

Hey all, hey @SweViver, I received my Pimax 8kx and the extension cable you recommended in 3m video: https://www.amazon.de/gp/product/B081D38N65/ref=ppx_yo_dt_b_asin_title_o01_s00?ie=UTF8&psc=1 However for me the extention cable doesn’t work, in fact I have snow in the display of the Pimax 8KX and some picture flickering. I tested on all my display ports (msi 2080 ti gaming x trio). Any others had this problem too or am I the only one concerned? Thanks in advance for your answers =)

14 Likes
Collecting useful posts about 8KX
Table of Contents (Wiki)
Would the Handtracker work with another adapter
Video Intro and Initial Pimax 8KX Setup - 5k+ Transition - iRacing
Is there anyone attending the Mid-Autumn Event?
Tips for Getting the Most Out of Your 8KX
Anyone know how to reduce white noise? I tester all option to extend 8Kx. Here is my conclusion
What cable was it that work for longer cable on 8kx?
Has anyone tried the new 6M Fiber cable for 8K-X
Headset not tracked [Solved]
Getting the 8KX next week
Techtalk Voting Poll
Any news on 8KX with 90Hz at Native?
Display Port Extension for Pimax 8k X
Would the Handtracker work with another adapter
twack3r October 8, 2020, 8:09pm #2

Please edit the above paragraph as some might understand the Lindy active DP repeater to be a passive coupler, which it is not.

I’ll be receiving this 5m fiber optic cable (I didn’t need 10m - otherwise I would have bought the CableDeconn one) early next week:

I’ll couple it with the Cable Matters repeater I already bought when testing 3/5m copper cables (tried with a 3m Cable Matters and a 5m DeLock cable - both 8K60Hz/HBR3/DP1.4/DSC):

EDIT: Cable Matters Repeater does not seem to work well.

Just FYI, I’m currently using a 5m USB 3.0 extension cable that has the option to add an AC adapter but I haven’t needed to use one. Is essentially a passive extension right now. Haven’t noticed any issues yet. 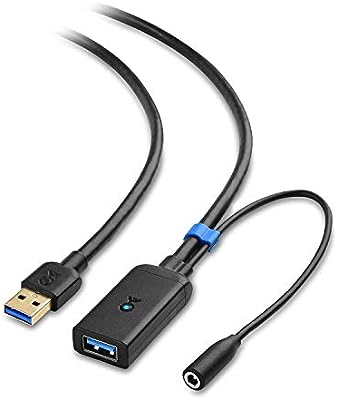 I contacted UGREEN to see if they could source more of the 10m DP I am using (that works fine in native on my 8KX), at first they seemed useful:

Could you please tell me from which online store you can or want to buy the product? Amazon US/UK/DE/FR/ES/IT/CA/MX/JP/UAE/KSA/AU/NL/SG, AliExpress, shopee, LAZADA, eBay, or UGREEN online shopping store? Or you want to buy the product directly from us or our retailers? So I can contact the relevant service team to help you ASAP.

but then they checked and came back:

Thank you for your contacting.

This cable now is out of stock in our store.

Hope this could help.

EDIT: Just tested the YIWENTEC fiber optical cable with the Cable Matters repeater and that works on my 5K+ so it’s not like the cable is broken or anything. I think/hope it’s the repeater that isn’t quite up to the task.

EDIT2: Also tried the YIWENTEC cable with a passive coupler (which admittedly is not up to spec, but does it really matter for a coupler?) and that didn’t work either. Really hoping the Lindy repeater will work!

Any Updates on this?

Any Good ones for US stores?
Looking for at least 2M(don’t really need more than that), extenders and repeater’s that are verfied to work on the 8KX.

I don’t think we can use the Cable from the 5k+
(i got a new one that’s already hooked up now, that i just got new).

Even with that, i need at least another 1m/3FT(just did not bother me) and i would have been fine for my 5K+.

so, seeing how everyone saying the 8KX is shorter, 2M/6FT is all i need.

I would try the Club3D passive extension cables if 2m is all You need:
https://www.amazon.com/Club3D-CAC-1022-DisplayPort-6-56ft-Male-Female/dp/B07RJ13CH9

Yes that Club3D 2m cable is the one that I’m using and it works fine.

Update on the GPU replacement:

On my 2080Ti using the 15m optical cable and the Lindy repeater I got a good signal with the slightest hint of snow on pitch black background.

Happy to report that on the 3090 the picture is perfect with that combination.

8KX with a 2080ti.
First tried the Club3D 3m cable with major noise issues.
Currently using the Club3D 2m cable with minor noise.
Tried the Cable Matters Repeater listed above to fix 2m cable noise and won’t connect at all, even when using a sub 1m cable

I have two copper cables to try (3m + 5m) and the fiber optical cable mentioned earlier.

The YIWENTEC cable works with the Lindy repeater…!

Finally able to play room scale gaming on the 8KX!

I was assuming ( and hoping) so

Personally, that looks too thin for me. I could kick through that accidentally while playing Pavlov VR. A metal fence gate on a hinge with latches for both the open/closed positions would be just as convenient, and could be more sturdy.

The mechanical aspects of this setup are first rate by the way. Especially like the hooks for headsets and cables, thinking of something similar myself.

It’s sturdier than it seems… 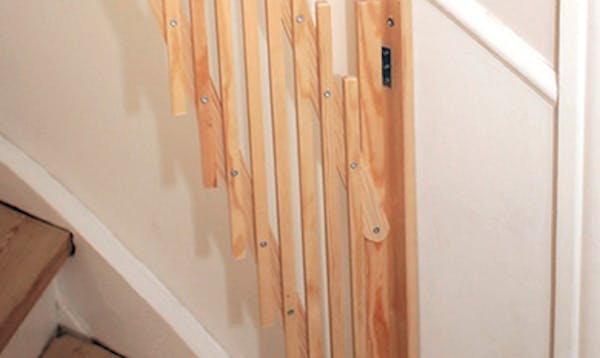 I actually thought about making two, one for the staircase and one for the area to the right on the first pic below…

BTW, the mats on the floor have two purposes:

I know it won’t save me if I run into the walls, but honestly I stay pretty static and use either free locomotion or WalkOVR/KAT Loco (have both)…

Don’t play much online FPS though as I’m too old and don’t like being constantly “fragged” by teens (sure I can learn, but I think there’s too much learning and too little enjoying in most online gaming)…