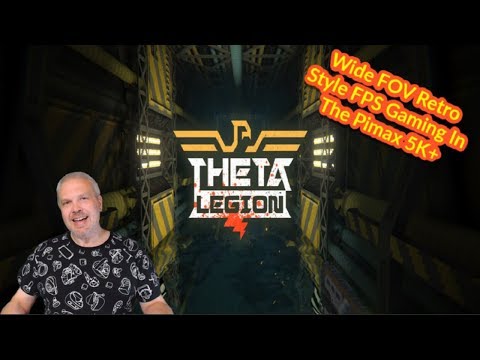 Tonight I am playing the upcoming retro style VR FPS game Theta Legion. As some of you might know I am a bit old school and came up playing games like the original Doom, Quake and Unreal so when the devs reached out to me to see if I wanted to give their game an early look I jumped at the chance!

I originally streamed this in the Rift S as it was meant to be played but of course I always have to check to see if these games will work correctly in my Pimax 5K+ and I’m happy to say that Theta Legion runs perfectly!!! No PP needed and it runs and looks great!

Theta legion was originally created for the Oculus Go but will soon be released for the Rift and possibly will also make its way to the Quest and of course as you see here it will work just fine through Pitool for an even more amazing VR experience! The game is tentatively set for release on 12/5 in the Oculus store so if you like what you see here tonight be sure to look for it then! []-)

Theta Legion as described by the developers:

Inspired by classics such as Doom and Quake, Theta Legion has a unique style including a blend of pixel-art textures, 3D environments and 2D sprites.

You play as a member of the Space Foreign Legion sent to investigate planets and space stations and clear all the threats you may encounter. The game is divided into several missions, taking place in various environments and you are pitted against many different enemies.

EDIT: The game is now officially available in the Oculus store! You can grab a copy here: https://www.oculus.com/experiences/rift/2662872500473494/?fbclid=IwAR1DISUtDf0QR9th7ScWhTThvGl9cksqIqiUoNtsS7wE0F6LJ_8nFhRQ4Kk

Also for those who prefer Steam I reached out to the devs and as of now they do not have plans to release it there but said that might change in the future.

Inspired by classics such as Doom and Quake, Theta Legion has a unique style including a blend of pixel-art textures, 3D environments and 2D sprites.

Please let us know what you think of the game after you’ve had a chance to play it for a while. It sounds like the sort of game I’d be interested in. I’m playing Quake 2 RTX on my flat screen right now.

Are they considering selling it on Steam? (Please ask them.) I’d be a lot more likely to buy it there, since I don’t have any desire to add yet another game distribution system to my PC.

For sure man… I just got my 5K+ working again tonight so I have a lot of games I have been meaning to play and this was for sure one of them! I will reach out to the devs and ask about a Steam release and will post a more in depth review of Theta Legion here once I have gotten further into it. This was a surprise live stream because I got so excited that my 5K+ screens weren’t blacking out on me and that the game ran perfectly and also that I already had it set up for the Rift stream I did earlier so I just decided to hit the go live button… stay tuned for something more polished soon! []-)

After watching your video, it looks like I’d need to get some VR controllers. For now I’ve only been playing cockpit VR games. I’m considering buying some Index controllers, so that I can get a free copy of HalfLife: Alyx. That’s the first game that has really tempted me to somehow make room in my home office for stand-up VR.

Yeah same here… I really loath the Vive wands and want to upgrade to the index controllers badly but they are priced outside of what I can afford right now… With the Vive wands not having the analogue sticks it makes gaming so much more difficult for me! Hopefully soon I can make the purchase and it is an especially good deal since they come with Half Life: Alyx… IMHO that game is gonna be an amazing experience in the new 8K headsets!

I can understand your feelings toward the analog pads. I have a Steam controller, which has 2 analog pads and a single thumbstick. Sometimes it’s convenient, since the touchpads can simulate a mouse, but for other games, the lack of a second thumbstick is a real pain in the (pick your preferred body part

Is this out yet? Im tired of hitting the refresh button.

Says here it’s free, but can Pimax headsets run Go games just like Rift ones? I only signed up for the Oculus store a couple of days ago and grabbed Lone Echo, so it’s all new to me…

Edit I guess it will from what @vrgamerdude says in the first post…will download and check
Edit 2: maybe not ready, I can ‘purchase’ on the site, but no sign of it in the app to download

Not sure what happened here… I will reach out to the Devs and find out… sorry for the confusion but they had told me it releases on the 5th… might have been delayed! []-(

No… The Go version will not work… Only the Rift S version!

Hehe! And just to show that everything already exists on the internet…

Ah OK…but Rift S version not generally available yet right? How did you test with Pimax? Was that a review version?

Yes… It was an early release that they added me to… I just sent them an email but I’m sure this was of Oculus’s doing as they are the ones who hold the keys to the kingdom when it comes to what releases and when. I checked in the new releases section and yeah it’s for sure not there so again sorry for any confusion. []-(

No worries at all dude, I literally signed up a few days ago. Will check back later, but also as an old Doomer / Quaker etc it looks fun, thanks again for the heads up

Hey anytime man… I plan on being way more active here going forward… I have so many new vids planned and can’t wait to share them! Also if anyone reading this has any suggestions as to games you guys want me to cover in the Pimax 5K+ and hopefully very soon the 8K+ please lemme know… Always open to requests! []-)

Great stuff, glad to hear it and look forward to more content (am subscribed btw).

I guess it really depends on what stuff you like yourself and what audience you’re trying to reach. Personally I was recently impressed by two ‘built for VR’ titles made by independent devs - Aircar and VTOL VR. The fact that they were designed for VR is immediately apparent, many AAA VR titles feel like a bolt on feature, simply because they are.

Neither title seems to be that well known, but once experienced they have a lot of converts. Maybe they could do with more exposure?

Aircar is more a futuristic city flying / ambient experience than a game, but unmissable for any Blade Runner fan. And just begging to be made into a full game

VTOL VR is a combat flight sim, but somehow manages to both be simple and deep at the same time. I find DCS a bit overwhelming, not been into heavy sims for a while, but I love pushing all the buttons and switches in VTOL, and bringing your visor down with the HUD overlays is just cool!

For Pimax fans, they have added the added bonus of running at full speed and on Large view on a decent machine, being optimised for VR performance over heavy texturing etc

(both are available on Steam)