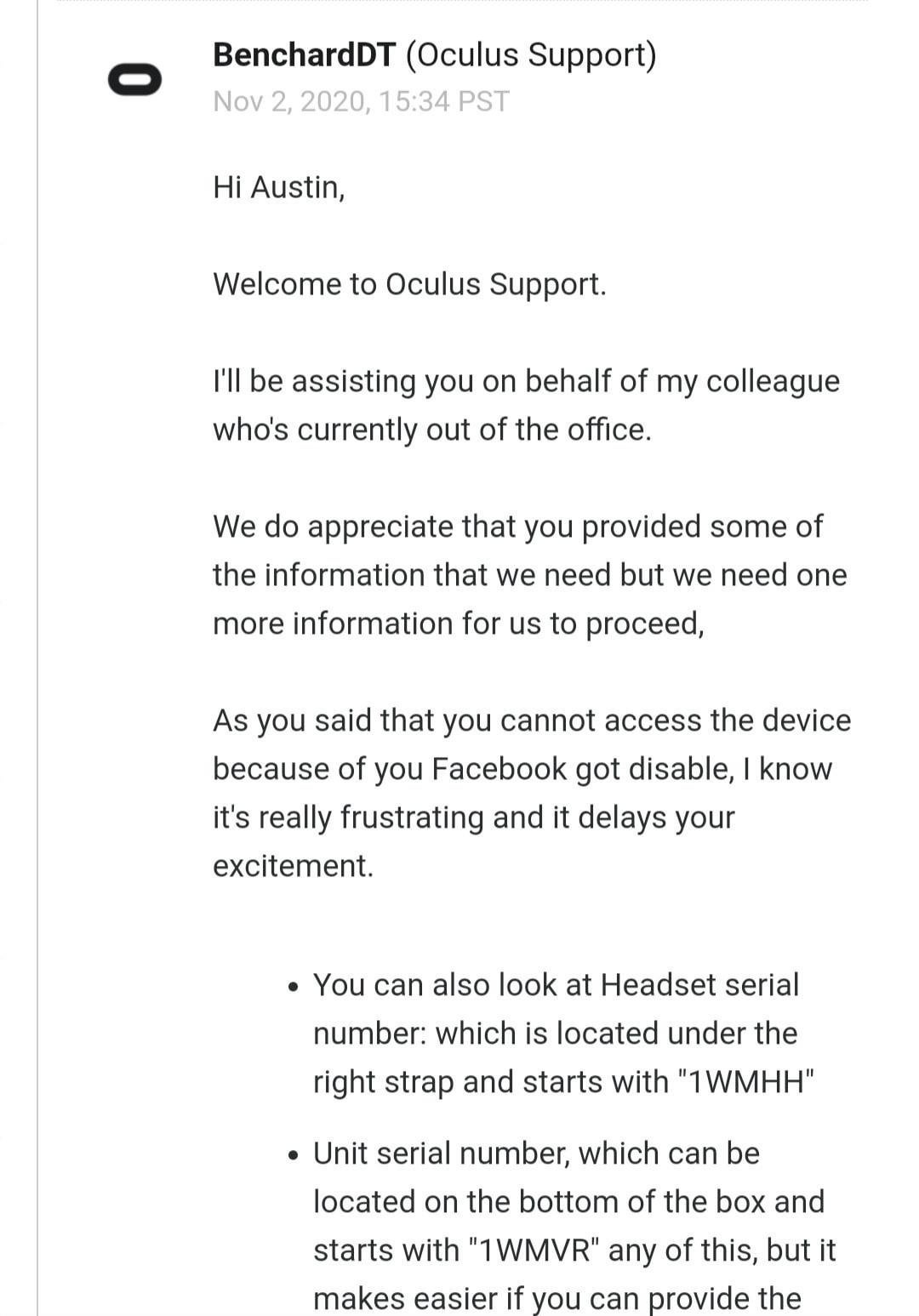 r/OculusQuest - The Oculus Quest elephant in the room

Be careful when Questing for a VR headset. There is also at least 1 Dev concerned with Facebook’s new direction.

r/OculusQuest - As someone who runs a VR studio I'm very afraid my company's...

It is one thing to be banned from the Social aspect of FB. However it is not okay to ban one from there purchases without a very valid reason ie piracy.

Cautionary tale is exactly how we should take this.

Facebook seems to be growth oriented, which means if they don’t find ways to drive more sales every day, the shareholders will demand whatever it takes to effect that result.

Under that kind of pressure, it is just not possible to make an adequate investment in preventing collateral damage.

SteamVR is no better though, and we need to get rid of that too.

Steamvr is at least open and usually only bans if discovers your adding pirated games to account.

You can also use “openvr” aka steamvr without steam. See Viveport.

Only real issue with SteamVR is changing things that breaks things. Which really isn’t that different than big Windows updates.

OpenXR which Valve is onboard will help streamline things.

Valve is better than FB RL by far otherwise it would be a closed platform only allowing support of Valve sponsored/owned peripherals.

No, SteamVR is extremely difficult or outright infeasible to use in a manner not firmly controlled by Valve, which is also bent on becoming a social network company. Running anything but the latest version is hard, the architecture is ridiculously complicated, and major new bugs happen all the time.

But hey, post a cautionary tale about one and say the other is ok. When things go much worse than they already have, you will be wishing there was an alternative.

The proof is in that Valve is much more open. And as said OpenVR is used outside of Valve. Valve also supports and gives back to linux. FB runs on linux and yet Oculus Linux official support was canceled unless that changed.

There is also an open controller driver as posted by @Fox2002 and @MarcoBalletta.

Valve also is not as bent as Facebook on being a lone social network. Myspace, Bebo, Yuwie I believe are all dead and more or less buried. With Bebo at one time sharing online gaming with Social network games cross play between fb and bebo (Warbook was an example)

Any System updates be a platform or OS risks breaking compatibility; sure it would be better if more open like linux. However OSVR is dead.

OpenXR is atm our best hope to make things in general for XR easier to develop for whether PC or potentially console.

OpenXR with OpenHMD, maybe. I am hoping I won’t have to polish up OpenHMD myself.

However, there is just no way any complete software stack from Valve is going to be ‘open’ enough to ‘trust’. They make too much money by ‘taxing’ apps added to Steam, to allow convenient alternatives to exist.

I am familar with OpenHmd. Nice project. But still suffers problems because of Opensource is often slow due to being blocked by closed minded closed source.

OpenXR is the best hope to get primarily away from propietary sdks to make cross platform development easier. Opensource really needs a full push as even closed OSes like Microsoft and Closed Drivers like Nvidia interfere with solid forward momentum.

OSVR had real opensource but failed to get the needed traction and likely is in part of it’s roots used in OpenHmd as both give support for any hmd to be used with proper needed info on headset specs. OSVR also supported plugins.

Bottling companies represent a key in why it is important to abandon closed thinking. However there goals are financially driven. The quest for environmentally friendly beverage bottle. If all involved were truly wanting to protect the environment they would pool there collective knowledge in a shared project; instead of wanting to keep it as a banner for marketing.

Granted the consumer with bottles/packaging needs to do there part and recycle. Of which recycling Europe is ahead of North American efforts.

With that being said I do agree it was devious of how Valve marketed SteamVR tracking.

You might have stronger familiarity but I think Laser tracking started out as a project on Hack-A-Day prior to Valve’s LH release. I remember reading up on a fellow trying to work out triangulation between laser sweeps.

We really need a strong push to get away from closed technologies while still supporting economics of companies.

Right now, it makes sense to setup an MSW box as an adapter, get things working in offline mode, connect it to a Linux machine by VNC, and firewall the MSW box so it has zero internet/network connectivity of its own.

OpenHMD solves that problem. We need it.

If that was true Linux would be king of the desktop. Which unfortunately it is not. Large portion of businesses are still slaves to microsoft software technologies.

Valve is still more the goto on VR for the most part for more open platform unless developing for Android.

If Professional users(Developers included) really pushed opensource we would have greater adoption of open standards.

Valve does push open standards for greater platform support. Vulkan/Opengl vs DirectX, Don’t recall the open input vs using Direct Input(MS). And Valve has had seminars on going these routes.

Sure there are power users like yourself that recognize better methods. However game companies have been slow to adopt over to linux. However Proton is helping as has Valve and Gog pushing this direction.

Has DCS released a Linux Native Client for VR?

I had to break down and install and upgrade to W10 just to close the gap for now as Full Linux support is still aways away.

Requiring fb account is not just a privacy violation. It is also Facebook wanting to have control over people and their behavior. Giving them the ability to shut you out of VR and your library of games is giving them this power. You have a right to the products you purchased.

Facebook requiring this has got to be a violation of consumer rights and the law.

You have a right to the products you purchased.

Morally I agree with you.

However I heard because you don’t purchase a physical product (like a good old fashioned CD which you could resell) - you pay for a software license which in the small print they can legally revoke. I think it’s true of all the electronic platforms, but Facebook seem a bit more heavy handed

That may be true. What is more concerning is they lock you out of being able to use your VR devices entirely. Can’t even browse the web with it, etc. So those are physical products that Oculus essentially bricks.

Again I agree. I Ioved my Oculus Quest 1 but as a result have resisted the Facebook Quest 2. My loss as IMHO both technically and value for money it’s outstanding.

This is one of the many pitfalls coming with full Streaming services removing the need for high end hardware to play at home. The provider will have the benefit of cutting service off.

Now at least if you have a copy at home and play offline you can still access your content.

Or on the other hand buying from platforms like GoG with DRM free copies might be the best protection from online based drm.

Valve is 1000x less on censorship, political correctness, and general campaign of interference with its users. Valve wants to sell games, they don’t care what your politics are. Facebook is much more dangerous.

I think it might be possible for a disabled Facebook account to be unlinked from an Oculus account, and then link a new FB account to Oculus. But this would require finding an old hidden api on FB for unlinking Oculus. They used to allow you to unlink but now there’s no option for it on Oculus website.

With old Oculus accounts this might still be possible; at least for a time. However finding out how to do it may still result in your new FB account being banned after a time due to same ip or identified Oculus account was linked to a previous account.

FB essentially needs to work out a way for FB social platform bans not affecting the Oculus side. This new direction of account verification ie Driver’s license will also limit whom can use an Oculus unless a parent is willing to let there kid play on there account.

Could you imagine if Consoles required something like a DL to use there systems?

Arent they being sued now regarding this?

Its funny how history repeats itself.

Both companies rescued and championed their respective technologies from near extinction

But this also seems to bring about a sense of hubris . Just like Nintendo in the 80’s they held a stranglehold on gaming back then. You couldn’t even release more than 5 games a year according to Nintendo.

They had final say over what games would get approval for their NES and they had retail chains kissing their boots.

And just like then it will take a rebel company to stand up to them and reject their mal-practice before they cease their ways.