I am thinking on getting one of these VR Backpacks. Does anyone have any experience with these? This unit comes packed with a RTX 2080 Mobile, but none Max Q, so more powerful than a desktop GTX 1080, or at minimum, same

A laptop will always be less powerful than a desktop computer. For the same price or slightly higher, you could probably get a 2080 Ti desktop PC.

You have to ask yourself if it’s worth it to do this or just to wait for a wireless module to come out. I see a few downsides:

I think the closest thing to experiencing wireless for now would be getting a VR cable management like the Kiwi Design V2: 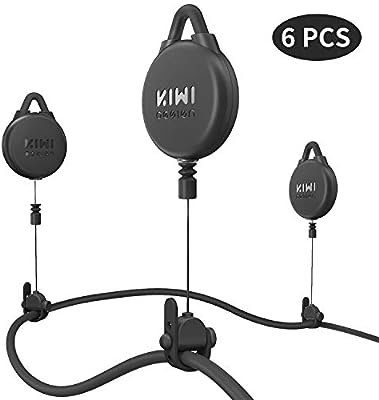 I have it, and while it’s not perfect, it definitely feels nice not to have the cable weighing down on my back. I can turn around a lot but ocassionally I will feel the cable touch my head if I spin too much in either direction. But you can always adjust the length of the hold. I also like it because the cable tangling only happens at the top part, making it easy to untangle. It is the closest I’ve experienced to wireless.

Yes, laptops get hot, but, this a dedicated machine for this type of use. The Harness uses Carbon Fiber for weight, rigidity and heat dissipation.

Ah I see. Well in that case, if you’re willing to spend the money for a wireless experience, then go for it.

I would say if you’re willing to wait though, you could spend that money on a 3080 Ti which could be just around the corner and the wireless module with DP 2.0 when it comes out. That would be a truly wireless experience without the weight on your back.

Well, the thing is the previous model with the GTX 1080 is going for 1,200, so thats not bad either. I have a feeling the rtx 2080 may be better for the Star VR resolution and the pimax

Will see about the wireless, thats not coming this year

I am thinking on getting one of these VR Backpacks.

My only problem with just leaving the cable on the floor is the damage to the cable done by stepping on it. I solved that by suspending a wire and paperclip from the ceiling, much like the KIWI system.

If your problem is the feel of being held back by the cable, consider the comparable impact of a ‘one hour battery life’. Most likely, at least some of that short play time will be completely wasted just dealing with SteamVR, Oculus, internet connectivity, or other issues. It’s a big investment for not something that doesn’t last long.

Does a VR headset still qualify as a standalone device if the computer powering the headset is strapped to your back rather than built into the goggles? I don’t know, and I’m not sure how much that distinction really matters, because while Oculus is...

In my opinion, the VR treadmills, while grossly underdeveloped, may be closer to the right idea. Flight sim chairs naturally can work quite well. Allow the user to move freely, while physically within a managed space.

I don’t think you read through the previous responses. That would have given more info of the thread reasoning. Your reply is interesting and much appreciated, is irrelevant and non applicable to the aim pf the post.

MDP 1.4 so it would work fine. There are many others who have successfully used MDP to DP adapters. I have a 1080 and a 2070 super (desktop for both) and it’s a good experience on either card with a 5k+, so I think performance should be fine.

I’m gonna have to agree with others though, I think a wireless solution is superior, even if it comes to the index before pimax that’d be killer. If you’ve got the money go for it, I do bet it’s a great experience and about as ‘high end’ as it gets atm. I never thought wireless would matter to me until I bought a quest. I find wirelessly streamed pcvr (VD works great if you have awesome internet) to be just as big of a leap forward as high refresh rates and good clarity for room scale games. Hard to get immersed when you’re constantly worried about a cable.

Thanks for the reply.

Only option for consideration.

The current lineup of RTX on laptops is underwhelming at best compared to how solid the 10 series mobile gpus were, severely clocked down even when not branded with ‘max-q’. The 2080 is definitely still a monster in a laptop, but I bet the super lineup is gonna be great, and if anything will drive existing prices down.

You will likely not see the Amd on any laptop with a powerful GPU until next year. Only Intels for the year. The Ryzen 4000 series will mainly be paired with GtX 16XX and the RTX 2060 at 65w.

Interesting the push back against the VR Backpack

Thanks for the opinion.

Sorry, I have read through the previous responses, as well as subsequent responses, and I don’t think I missed anything.

I also forgot to mention. Significant sacrifice of visual quality.

When I asked, “Why?”, it was with the intended subtext - what are you really trying to achieve? Immersion? Less hassle? Portability?

I considered a VR backpack design myself a while back, and concluded it could not serve any of my use cases better than the alternatives.

You did. I said, I need to be mobile, the most important bit.
The options are a laptop or a backpack, nothing else

Oh! I completely misunderstood that, because in the current economy, the idea of having a reason to be mobile in that sense seems years in the future.

Heatsink weight is more of an issue than case weight. Especially because my own experiments show the best possible case fan airflow (5x140mm + 2x120mm) is little if any better than letting the CPU/GPU take in fresh air.

Mini-ITX, with the GPU fan intake and exhaust directly behind external vents, or with the GPU watercooled, would be my first choice. I have been looking into mixing a PicoPSU with a 12V switching regulator and a LiPo for backup power and smoothing.

If that is not an option for you, then I can see why you would want to go with a backpack PC.

As for laptops, this is the one I would consider. Generally the best gaming laptops don’t have adequate heatsinks to keep up with VR loads. But I doubt it is powerful enough for more than Virtual Desktop.
https://www.lenovo.com/us/en/laptops/thinkpad/thinkpad-x/X1-Extreme-Gen-2/p/22TP2TXX1E2

Yes I do, I had the Omen X ver, and used it with a Rift S and played Half Life and ran it smooth as could be. It’s just the batteries do seem to run down quick, maybe an hour, so having 4 is good but more if you plan on playing for longer sessions. Now mine was using the mobile 1080 and I think my settings were normal in the game but it still looked awesome, Now if you plan on using a 5k, I’d say that the 2080 should be plenty, on benchmarks it’s on par with a 2060 desktop card fyi…

Don’t be cheeky. You don’t know anything about me or what I do.

About the rest of what you wrote, Thanks for sharing!

Di you have issues with the HMD power supply?

What happened to your Omen Backpack? sold it? How come?

When I checked the benchmarks of a mobile 2080 which is what i’m assuming the HP is using, in terms of results, it was on par with a desktop 2060 on results per say, Just as my omen x 1080 mobile wasn’t where a true desktop 1080 was. I sold it because I saw the prices for an open box for the G2 2080 version going cheap around $1300 on ebay, so hopefully I can get my hands on one this summer. So I decided to part ways with mine and wait till later to buy the one your interested in and try using a Pimax as well. No issues with the HMD Power supply, I connected a Vive pro to it and no issues if that’s what you meant about the power! I’ve used 3 headset with it, Rift S, Sam Odd+, Vive Pro. I loved the inside/out tracking with the Rift, go anywhere u wanted to.

So not dealing with the cables made a difference? Do you think for demonstration the backpack is not cumbersome when multiple people have to put it on?

I am sure you are awesome. I was serious, I read and misunderstood mobile.