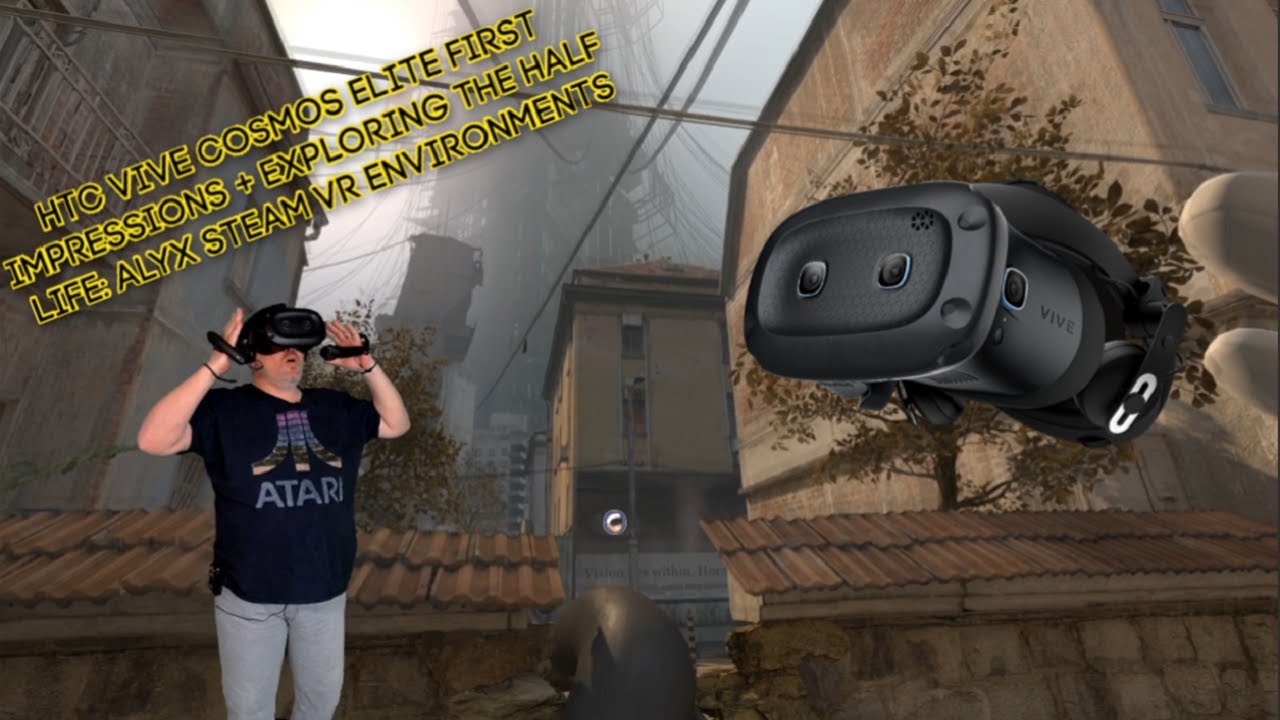 Today I’m taking my first look at both the new HTC Vive Cosmos Elite and the Half Life: Alyx Steam VR home environments that I got access to by purchasing a set of Index controllers. Needless to say I was excited to see both and I want to again thank HTC for sending me the Vive Cosmos Elite to use here on my channel!

So what makes this different from the previous HTC headset the Vive Cosmos that was released in October of 2019… What makes it Elite? Well that would be the return to outside in base station tracking using the Steam VR 1.0 base stations and controllers. This is accomplished by using the new face plate that comes pre-installed on the Cosmos Elite out of the box. This new face plate will also be available for standard Cosmos owners to purchase soon and just by adding this it will make the existing Cosmos no different than the Elite shown here other than color… HTC has returned to the black color for the new Elite and I have to say I like it!

The return to outside in tracking was a good thing IMHO because even though it got better with updates, the original Vive Cosmos suffered from some of the worst inside out camera based tracking I have ever seen! HTC just hasn’t been able to get it working up to the standards we see with devices like the Oculus Rift S and Oculus Quest even though they have more cameras to track from. Another thing that has returned but something that I am not happy about is the controllers from the Vive and Vive Pro line up. I really would have hoped that HTC could have found a way to get the original Cosmos controllers working in Steam VR mode but unfortunately, unless you own Index controllers already you’re gonna be stuck with those old and clunky Vive wands which are just not good controllers at all in my opinion and make this new headset feel dated right out of the box! I will say though that using it with my index controllers worked great and this is how I will play in my Cosmos Elite going forward.

Even though I don’t show it in the video I do also like the fact that just like its predecessor, the whole face of the headset has the ability to flip up. This is very convenient for a quick glance back into the real world but at the same time, this comes with a drawback in the fact that I can never seem to get the headset close enough to my face. This causes slight distortions in the peripheral vision and makes it seem to have a very small sweet spot. The problem is easily fixed though by just adding some Velcro straps to the sides to pull it closer but obviously this negates the ability to flip it up. I really wish HTC would have mimicked the Rift S’s ability to slide forward and backward on the halo style head strap. this problem was very similar to what I had with the Samsung Odyssey plus as well so I would love it if manufacturers somewhat standardized this in all halo style headsets going forward.

Overall I feel like HTC has redeemed themselves somewhat with this new release by finally bringing good tracking to the Vive Cosmos and by keeping their promise of modularity for the Cosmos line with the new face plates, but with the high cost of entry at $900 and fact that the controllers were not updated I am really on the fence as to recommending this over other headsets currently available. I am not saying that the Cosmos Elite is a bad headset… it just seems priced a bit high for what you are getting IMHO. For just $100 more you could get the full Index Kit with the 2.0 base stations and Index controllers. One thing that does help to offset the cost of the Cosmos Elite a bit is that HTC has included a 6 month subscription to Viveport Infinity which is a great value especially for new VR users and also a copy of the highly anticipated VR game Half Life: Alyx with the purchase of a headset but then again you also get that with the Index too so it really is a toss up and I guess it really boils down to personal choice!

If you want to learn more about or purchase a Vive Cosmos Elite For yourself please visit the link below:

Thank u for the link. I think Vive are onto a winner with the only wireless option, especially now the tracking has improved.

Yep… I’m really missing my old TPcast that I had for my Oculus Rift CV1 right about now… But I just heard from my contact at HTC that I will be getting a wireless adapter in the next couple of weeks for this Cosmos Elite so I can’t wait to cut the cord again at least on one of my PCVR headsets! C’mon Pimax lets get that wireless module finished because cordless PCVR gaming is AMAZING!!! []-)