So today I am doing a MOD that I have wanted to do for years but unfortunately never had the equipment or courage to try and that is the Gear VR lens swap for the Vive. This MOD popped up in the community a few years ago when the original Vive was getting close the the end of its life cycle. I was always amazed to hear the reports of those who had done it saying how much better it made the experience because finally there were no more “God Rays”

For those who are new to VR or don’t know what I’m talking about lets flash back to 2015 when most people in the very small VR community were still using the Oculus Rift DK2. This early VR headset used non Fresnel lenses and that meant that there were none of these light artifacts that we see today in most modern headsets. The view in the trusty old DK2 was clear but the old lenses it used did have their own problems with some very slight barrel distortions and chromatic aberration but honestly I would take those issues any day over having beams of light flashing all over the place when presented with a high contrast scene!

So after almost 2 years of using the DK1 and DK2 with aspheric lenses it came as a complete shock to see the first generation retail headsets come out with a change to using Fresnel lenses. These do have there advantages over traditional aspheric lenses but the trade off was the introduction of the “God Ray” artifacts.

Gone was that clear view of space that I had always marveled at in my favorite game: Elite Dangerous. All of a sudden I found that and many other games almost unplayable because everywhere I would look there was a beam of light shooting into my eyes. Needless to say but myself and many others that had waited so long for the consumer VR headsets to finally release were not happy. In fact, I was so heart broken over this change that for the longest time if you did a Google search for “Oculus God Rays” you would find an article I wrote for vrspies.com as the #1 search result complaining about this issue ! [;]-)

So for years now I have longed to see VR without Fresnel lenses and thanks to the fact that I have a few different HTC headsets I decided it was time to finally attempt this MOD. I am happy to say as you will see in this video that it went well and the results were stunning! No more God Rays… Huge Sweet spot… and no barrel distortion or CA that I could see in the time I was testing this by watching a movie in Bigscreen. I finally had my clear view of VR back and I am so happy I did this now!

If you want to attempt this mod for yourself there are a few things to take into account… First it will most likely void your warranty with HTC if your headset still has one but the awesome thing is that this MOD is fully reversible as well so if you take your time and don’t damage anything you can put it back to factory shape in minutes.

The second thing is that there are two methods I have seen for doing the MOS… You either take the lenses out of an existing Gear VR and 3d Print or purchase a 3d printed set of adapters like I did or I have also seen some great reviews of another complete kit that is sold on Etsy that is already assembled and ready for installation into your Vive Cosmos or Cosmos Elite. I will include links below for both the adapter rings that I got on eBay and also to the complete kit that I read about on Reddit. 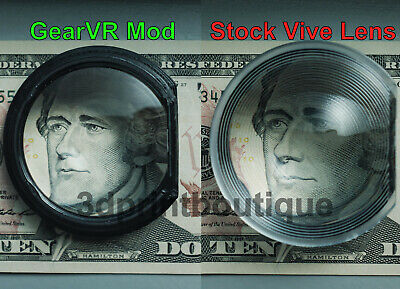 Looking to take your VR experience to the next level on the HTC Vive or Vive Pro?. Just look at the picture at the increased clarity using a GearVR lens over the Vive's Fresnel lens. 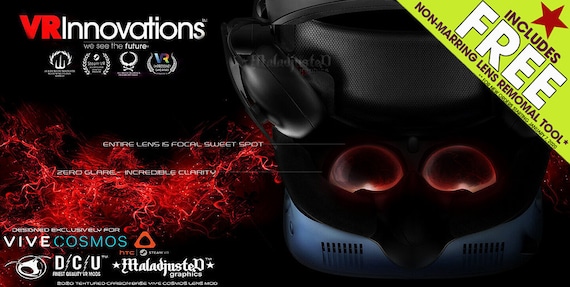 How does the cosmos compare to the index, reverb, and 8k x with this mod? I have a cosmos from work, do you think it would be safe to do on that (safe to get back to factory lenses if necessary)?

I made this mod to my Vive Pro… it’s an incredibile improvement.

Has anybody applied a mod like this to a Pimax? How much FoV would be lost? What would be the panel usage percentage? What about distortions? Is there any optical advantage compared to e.g. small FoV with the original lenses?

It’s impossibile. There are not Samsung Gear Lens for a Pimax

XTal has specific lens no fresnel

yes I’ve had this mod in my vive , only issue for me was that this gear vr lenses limited FOV about 5~6% which is not much but quite noticable.

Well you couldn’t really compare it to the 8KX because that is in a class of its own IMHO… but to the Index I would take a Cosmos Elite with this lens mod any day over that headset! Don’t get me wrong I do very much like the index but it had some of the worst God rays I have seen in a while when I tried it and TBH other than the audio I really didn’t find anything in that headset to be a step forward for VR. With my cosmos elite now I have both crystal clear image and wireless capability so I would put this as my second favorite headset now to my 8KX… If only Pimax would also ditch the fresnel lenses for asperic ones then I would truly be in heaven! []-)

Yep… best MOD ever… If only we could find a way to do something similar for our Pimax headsets without losing any FOV!

I just don’t think this would be possible on a Pimax headset without a tremendous loss of FOV. Also since the Pimax heasets have canted displays you would have to do a lot of alteration to the distortion profile to get it to work correctly!

Yeah I heard that about the original Vive mod but I’m happy to say that if it did reduce the FOV I can’t see it! Maybe it is something to do with the newer screens in the Cosmos? I was also pleasantly surprised that I did not have to alter any config files to make it distortion-free and it just worked immediately after installing the adapters for me! []-)

Made the gearvr lens swap in my vivepro, too. Much better clarity and overall experience. But i had to do the lens distortion file swap on every steamvr update.
I recall that the lenses of the cosmos and the vive/pro are the same. So i doubt that you do not have to correct for the different gearvr lenses. Download it from github and try it. Certainly you will see the difference…

If anyone finds this mod causes eye strain as I did in the vive pro ( but not the og vive ) , a fix I found is to put a few extra layers of double sided tape on only the peripheral sides of the lens inserts to change the lenses focal point slightly towards the center view , I can play for hours in my wireless vive pro now.

Sorry to be lazy but do you have a link?

Man that’s a tough call because after doing this mod I really do find the visual clarity to be miles above the 5K plus but it would be so hard to lose that sweet FOV! However if FOV is not your most important factor in a headset then I would say yes absolutely… The crystal clear image combined with the fact that I can go wireless on this headset is making it one that I seem to reach for quite often now… Well when I’m not playing with my 8KX of course! [;]-)

Interesting… I’ll definitely be on the lookout for this issue as I use it more so thanks for the tip! []-)

Thank you for the answer! I agree, FOV is important, even if I can only use normal FOV (eyes too far from the lenses). I wonder if the loss in FOV is still so significant, when considering this.

It’s so easy to forget that FOV even on normal should be much larger than the competition, in the vertical as well. I’ve had a Rift S for a while, and that was really like running around with shutters.

How’d you compare the FOV of the modded CE with the Index’?
And clarity vs Index vs Pimax 8KX)?

Btw, watched your video twice on two devices and +2’d it, all I can do as a thank you for the information

Sorry to be lazy but do you have a link?

Ok but this says it is for the OG Vive… Will this also work with the Cosmos Elite?

It’s cool that this also works for the Cosmos. I bought the lenses for the OG Vive but could not stand it because of the distortions. Even after applying the lens profile, it was still very visible for me. Just shows again that human perceptions are totally different and nobody is wrong or right when seeing/not seeing something.