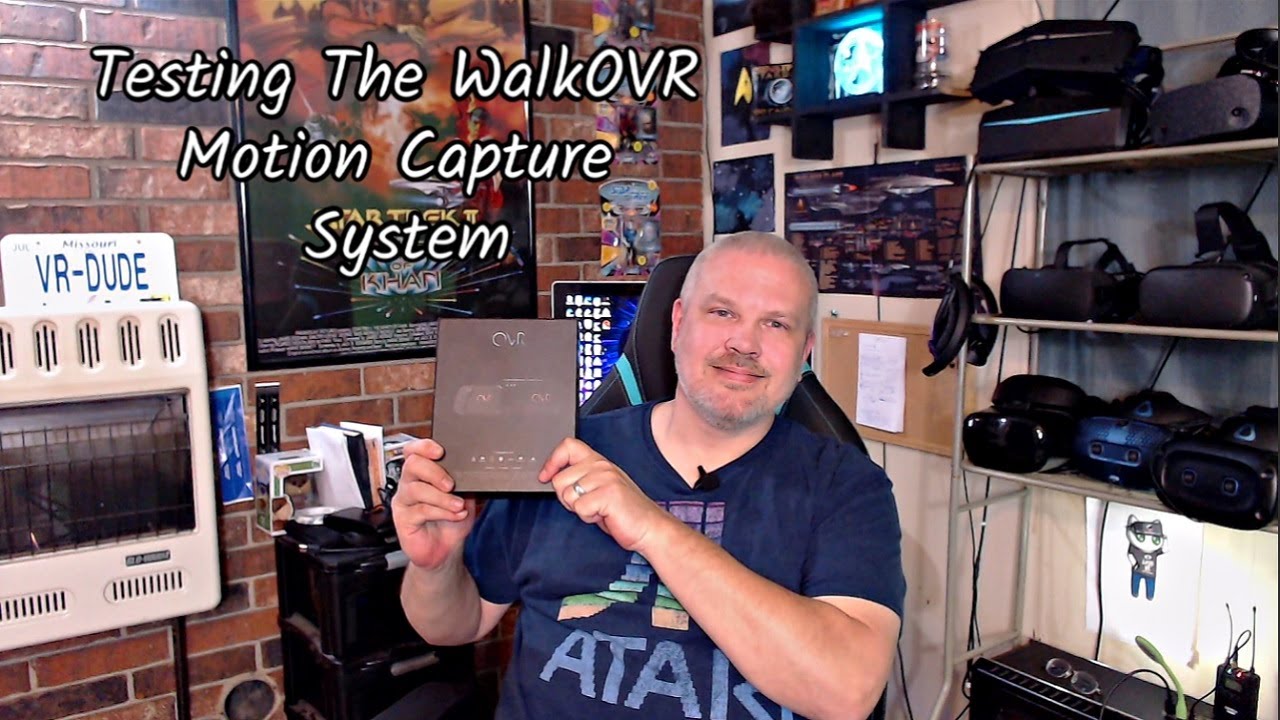 Today I am diving back into my pursuit of finding a walking system that feels comfortable in VR. As you may know last month I tested the Agile VR lower body exoskeleton and unfortunately could not really get it to work correctly. So I kept looking and then I ran across the Walkovr system and I want to thank Tugra from Walkovr for sending me one to review. After some very quick and easy setup I had it all strapped up and ready to go. I have to say that the setup was very straightforward and getting the unit on and off is not difficult at all. The elastic bands have good strong Velcro and hold the transmitter units tight but not uncomfortably so. The system consists of 5 transmitters that are sending data via a Bluetooth connection back to the PC. One thing I found is that you want to get your Bluetooth dongle up and away from your PC for the best results.

The Walkovr Software suite has only a few settings that need to be fine tuned and were again pretty straightforward and not overly complicated. I was able to get it dialed in to almost feeling 1:1 in the new Half Life Alyx game as the Walkovr software had just had an update the day prior to filming this that optimized the system specifically for playing Alyx.

Once I booted up Alyx and got into the game I was amazed at a few sudden moments of strong feelings of presence as I was walking up a staircase in the beginning of the gameplay portion of the video. As I mention it was almost as if I could feel the sensation of an elevation change as I walked up the stairwell. This was one of the times I really felt that the software was in sync 1:1 with my actual steps and man lemme tell ya… it was a fleeting but magical feeling!

Another thing I wanted to touch on with Walkovr is its potential for VR fitness applications! As some of you may know I lost almost 50 pounds last year doing a fitness series here on the channel with my Wife Stacey and unfortunately I have already gained most of it back so I can already see tons of VR fitness potential in the WalkOVR product and will definitely start to explore that aspect of it as I try to lose some weight again. Let me know in the comments if this is something you might be interested in watching as it would only be me this time and not both myself and Stacey.

So I have to say I really enjoyed playing in the WalkOVR and will continue to do so… I want to thank them again for sending this out! If you want to grab a WalkOVR system for yourself then head to their website through the link below.

no. walking in place =/= natural walking, its just unnecessary and makes people look like fools when we can just use a joystick.

Haha… No… It definitely adds something to the experience. One of the biggest drawbacks of VR over the years has been a feeling of unnatural locomotion which is what these devices are trying to solve. Its not just the walking in place but also the bounce of the fluid in your inner ear along with the stepping motion that brings it all together… this helps to locomotion in VR feel more like natural movement that we experience everyday and can also help people with VR motion sickness. My wife suffers from this and I will soon have her test this theory. So there is a lot more to this than just walking in place and looking look foolish which lets face it… any of us even playing in just a regular headset and hand controllers already do to most of the outside world…LOL [;]-)

Have you tried Advanced Settings new redirected walking? I find it to be a pretty compelling first draft at true continues walking. Kinda janky but its definitely something to keep an eye on. Heres a link- https://store.steampowered.com/app/1009850/OVR_Advanced_Settings/

In case people are wondering, redirected walking is basically the game world subtly shifts as you walk forward so you end up walking in circles in your play space while your brain thinks your going in a straight line. Obviously the bigger your playspace the better the experience will be so that’s something to keep in mind.

The Kat Loco seems to do the same thing but with a lot less wires and slightly lower price. I wonder if they can send you their product to do a comparison.

You’d want to see if the issues Marco mentioned are resolved. Less sensors also means less. WalkOVR is extensible with additional nodes. Kat Loco canceled the option of adding more sensors for mocap. I had 2 sets ordered and cancelled one after they said they wouldn’t be able to deliver on Advanced Mocap.

@DrWilken may have some news on how these compare to one another.

I use my old vive wands to do the same with Natural Locomotion software. It definitely adds to the immersion a good deal.

I need to get a better way to attach the wands to my ankles though and they are bulky, haven’t gotton around to it. Have just been tying them on with socks! Haha.

@DrWilken may have some news on how these compare to one another.

Haven’t used any of the sets for a while, but last time I tried I still thought WalkOVR was better due to easier setup (no annoying calibration every time), even though KAT Loco had the benefit (and downside, being it doesn’t seem as stable) of being completely wireless and comes with it’s own little router of sorts (looks like a tiny router but it’s Bluetooth).

WalkOVR requires You to buy an inexpensive Bluetooth dongle and it works really well.

I really should try to give both another go soon, but… Kids…

P.S. It’s been months, so things might have changed…

Yeah if nobody has tried the game Shattered Lights,go get it! it allows you to walk in place just turning and some crawling , you think you are really walking around a lot but all your doing is kinda going in circles turning one way and then back, but the feeling of really walking in the game and not teleport or loco is such a great experience, I wish every game could be like that or there was a comfortable device allowing us to walk, I think this is the last piece to the Ultimate VR experience we all are seeking. Oh when I played the game my space was 13x15

How about for lateral movements and backwards movements ?

How is that achieved?

with Walkovr you just lean back or to the side and it activates the backwards movement or strafing… worked pretty well but TBH I rarely use these movements with these devices… I’m really just interested in forward walking movements.

I’m having trouble getting my WalkOVR device to work… it took me some time just to get OVR portal to connect and that only happened after I disabled the Bluetooth built into my PC and replaced it with USB bluetooth. But now I still haven’t gotten it to work. Can you tell me… in the OVR portal on the lower right it shows you a visual with arrows the movements of the device. For me, the arrows light up left, right and backwards but never the forward arrow no matter what I do including walking in-place. The instructions are really limited so I was wonder if you can tell me… is the forward arrow supposed to highlight when you walk in place or lean forward? In any case, I try games like Arizona Sunshine and it simply doesn’t do anything… i can lean to sides, back and walk in place and nothing happens. I set the game to free locomotive and still nothing… I’m kinda getting frustrated with this device now. Any suggestions would be appreciated.

It works fine for me, I walk in-place to move forward.
try these steps:

I didn’t know about the firmware and I’ll try that… but I’m still wondering though about the question I asked… when you are have WalkOVR on and working and looking at the App on your computer screen… when you walk-in-place does the Front arrow light up? Is it suppose too? Again, thanks for the info and I will try everything you suggested.

when you walk-in-place does the Front arrow light up?

Yes.
I thought it is ovious, so I skipped that question)

Yea, it was probably obvious but when things don’t work as you expect and you get frustrated working on this issue over a long period of time… obvious goes out the window… thanks again for info.