Just want to start the ball rolling in anticipation of the upcoming 12K reveal on Friday.

What do you think we will see?

Will it be a repeat of the "infamous 8k Tested " reveal?

I would hope to see a final near ready to produce version by now if they want to meet that 2022 release date.

I hope to see more of those SLAM controllers , did Pimax figure out their SteamVR driver issues? 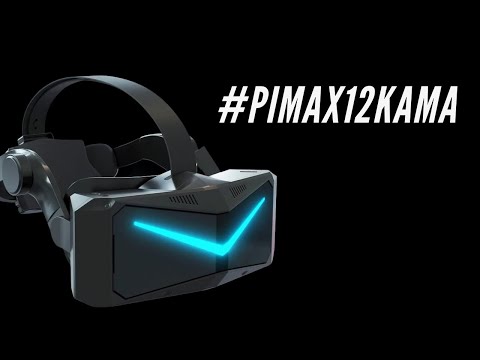 Will it be a repeat of the "infamous 8k Tested " reveal?

Nah Tested got a hands on.

I would hope to see a final near ready to produce version by now if they want to meet that 2022 release date.

I would have said that this isn’t realistic, given all of the specs they have announced; but then again, they wanted to show case it on CES in January allowing for a hands-on, so yeah, they must be pretty much ready by now - bring it on ! /s

If I read between the lines it will be a mere interview plus Kevin holding a thing into the camera at some stage: it should be well beyond mere mock-up stage, but I don’t see it being anywhere near an almost ready for production golden master stage either. So some prototype, which means it is anybody’s guess if this is 2 months or 2 years from mass production stage.

So what do I expect to learn ? Not really much, if I am honest. The 8K and 8KX was slated to be almost there several times and we saw delays occur nevertheless, so no matter what Kevin says about the time-frame I would be skeptical, as he has to rely on the same engineers who provided him with the estimates last time around. Even when they deliver the first 12K to say, Youtubers or others for feedback, we have to expect a list of substantial issues to come back to them forcing them to re-design or re-work some elements of the product.

More interesting honestly would be to see if they have cut any specs/features: that kind of decision making would actually be a good sign because it would show that they learned in the process that one device cannot satisfy all use-cases, and if it tries, it will likely end up serving each of them only on a mediocre level - at best.

Have they revealed a price for the 12K yet?

That said, there will be other cheaper headsets in the “Reality” range. So think of this like the new 8KX, with a 5KS equivalent and even maybe an Artisan equivalent coming.

I know the 12K is the flagship and the most interesting, but if they managed to take the SLAM tracking, and trimmed off a lot of the higher end features and made a stripped down standalone unit for like 800 USD then I think they’d have a seriously compelling product. Perhaps something like current Artisan level visuals and FOV but with upgraded lenses, markerless insight out tracking, wifi PC streaming, direct video input and eye tracking then it could be a seriously competitive product that would actually do very very well. I don’t know how realistic that is though.

Personally the 12k is out of my price range, it’s just too much. If there’s an 8K QLED for like 1500 then I’ll be on that. That said, if the 12K really and truly is everything they said it is then I might sell a few headsets I currently have, trade in my 5KS and make it happen (and also tell absolutely no one in my life how much I just spent on a VR headset).

Also was my thread not good enough for you drow?

It will have that as a module, afaik.

This one: MRTV Live stream with Kevin, showing off the 12k, link now up (for Friday) - #9 by reptilexcq

Yours? And do we get Bruschetta and Montepulciano there?? Lead the way!!

I only agree because I don’t trust anyone but oculus to do inside out tracking right. But if it was done right I would gladly ditch lighthouses as it is an ever-looming expense. They will break down eventually.

Experience is a virtue in itself.

If I read between the lines it will be a mere interview plus Kevin holding a thing into the camera at some stage:

This is normally the kind of thing reserved for @PimaxUSA & @SweViver events. Where is sweviver anyway?

Lighthouse tracking is honestly extremely overrated imo. When it works, it does work exceptionally well, but I’ve had more problems with lighthouse tracking than I’ve ever had with markerless inside out on Quest or even WMR (outside of tracking volume). Reflective surfaces, dying hardware, incredibly expensive, it’s just not a consumer friendly solution. It seems great for enterprise.

Even things like the dongles, which afaik I know are just bluetooth dongles, are ridiculously expensive, like enterprise costs. You can buy a steam controller, back in the day, with the dongle (that could be flashed to work as a lighthouse dongle) for less than the just the lighthouse dongle by itself. That said, I do think that’s only really relevant to the dongle.

It does seem like lighthouse tracking hardware itself is genuinely very expensive but it’s just too expensive. I don’t even mind base stations but surely there’s a more cost effective base station solution possible.

The perfect tracking is going to be controllers with cameras built in, essentially 100% full tracking volume, no occlusion etc.

I hope Martin is alright, I haven’t heard of him for a while!

This is informal AMA style event so just one of us this time but Sweviver and Josh (from Pimax Frontier) I’m sure will be in on the next one.

Nah Tested got a hands on.

Was this a “review” of any sort, worth a watch or read? If so can you provide a link thanks!

It was the first introduction video during the Kickstarter. Might be a challenge to find.

Absolutely agree. I am not buying a $2400 high end VR headset that has inferior inside-out tracking versus what I have now.

I’m sure all the flight simmers will be happy about inside-out tracking as that suits their use case fine. Better than lighthouse tracking even when all you need is to track the headset while sitting down, and you don’t even use the controllers.

But Pimax really should be aiming for a larger market than just flight simmers. Otherwise the audience for the 12K is going to be super narrow.

I only agree because I don’t trust anyone but oculus to do inside out tracking right.

The Quest 2 probably represents about as good as inside-out tracking can get, and it is not great. I also have a Quest 2 myself, and the weaknesses of its tracking are apparent to me both when I use it myself, and when I’m using an Index or 8KX with lighthouse tracking and interacting with players that are on Quest 2.

My aim is noticeably better with lighthouse tracking. It gives me a clear edge over Quest 2 players.

And in social VR games, the limits of the tracking area for the controllers become more obvious. Quest 2 players walk around with T-rex arms all the time because the Quest 2 can’t even track your hands if you have them at rest at your sides.

Lighthouse tracking is honestly extremely overrated imo. When it works, it does work exceptionally well, but I’ve had more problems with lighthouse tracking than I’ve ever had with markerless inside out on Quest or even WMR (outside of tracking volume). Reflective surfaces, dying hardware, incredibly expensive, it’s just not a consumer friendly solution. It seems great for enterprise.

It has more moving parts, and it’s more expensive, I agree. But if you’re trying to paint it as if it hardly ever actually works, that’s false. Most of the challenges for lighthouse tracking are just one time setup issues (including the cost). Once you’ve got it setup properly, it’s quite reliable.

If you’re looking for the best performance, it is the only choice right now. And how much of the market is going to spend $2400 on a premium VR headset with the best of everything except when it comes to tracking performance, they’ll settle for mediocre?

Flight simmers who don’t need controllers anyway and… who else?

Seriously, Pimax should be paying attention to VR headsets that completely bombed because of poor inside-out tracking. It is not easy to get right, and it’s such a core capability that no VR product has ever survived that had poor tracking. The failure of the Cosmos knocked HTC out of the consumer VR market. I doubt that Pimax can afford to have the 12K bomb like that either. If SteamVR tracking is going to be available as a module, it had better be an available option along side the inside-tracking module at product launch.