[NextGenVR] Picture Quality vs Field of View! - Which is MOST Important for VR Immersion?

In this video I will be answering a very common question, which is, what is most important when it comes to VR immersion? Is it having a really wide Field of View or a Super high picture quality? As someone with extensive experience with VR headsets I will give my personal verdict. However, keep in mind that everyone has their own subjective opinions and what they value in a VR experience. 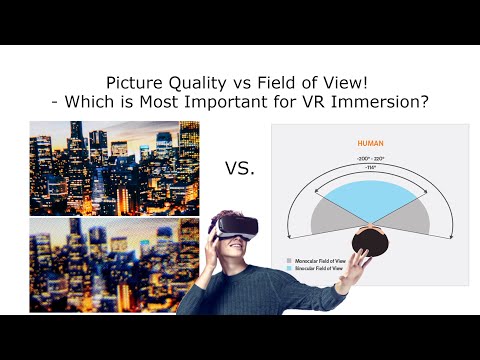 I say both are important, so try to find the optimum balance for your particular system. (My thoughts, prior to watching the video.)

I wish i could say but as ive never used a very high clarity hmd like vario im only guessing. But im not paying £2400 euro for nothing more than very high clarity. Im waiting for 12k which will have clarity + high fov + wireless etc.

Not only is both resolution and field of view equally important; But so is optical clarity/sharpness/off-axis-behaviour; Refresh- and matching frame rate/responsiveness; Brightness/contrast; Quality of depth of field (if we ever get that); And probably several more that do not immediately come to mind.

I have a headset that I across the board prefer over another, that outclasses it both in terms of resolution and FOV, because of the picture quality, where, as Next rightly observes, one need to remember that resolution is only one of several contributing factors.

One of the things I include in “picture quality” here, for the sake of narrative focus, is the geometrical verity of the projection that goes into the viewer’s eye; It is by any means important- and conceptually distinct enough to warrant a class all of its own, but ultimately it is also a product of the picture-lens system, so… :7

The wide FOV of the latter is really freeing, as long as you are kind of “zoning out”; Letting your eyes go out of focus and more “sensing” your surroundings, than actually observing them. When being more “present of mind”, however, the narrower FOV of the former ends up “feeling” effectively wider that the actual wider one, because it is all useful FOV; I can read things fifty degrees out, that in the wider FOV device is since many degrees just a blur (other users of the product report different experiences), and things appear where they should.

I am landed on an ice planet in Elite: Dangerous, and can see the ground texturing around me - distinct for quite a stretch of land away. It exhibits quite a bit of aliasing, with the newer shinier ground materials in the Odyssey expansion to the game, which produces bright specular highlights, and dark shadows, exacerbated by the relatively low resolution of the device, even with tons of supersampling, but the texture is crisply visible - sharp and distinct - it “pops”, as they say, and geometrically my view holds up as a steady volume in front of me.

…but in the higher resolution HMD… Well, neither the optics, nor the image definition is there; It is too blurry, too dim, too lacking in contrast, and all that eventful terrain around me blends together into an indistinct grey haze only two steps in front of my feet, with the closer ground ground still so faint it’s barely discernible, even with extensive fiddling with contrast and brightness controls. The higher resolution should make the exact same view as in the lower spec headset really resolve, but instead it is as if a bank of fog had descended on me.

Not really sure if you “answered” the question. Or just created more questions

At the end of the day to quote Pimax . " Why choose? When you should have both? "

as was said, res, fov, clarity are only few things that are important.

for me most important are those points:

Summary if you stick only to fov/res params it has a high chance that other points will botther you to a point when you cant enjoy hmd anymore. Some ppl find some points of the list bother tham the most, some ppl find another points. But HMD is a very complex device with bunch of nuances to consider in order to get very good immersed experience .

I often see ppl specically look for something and get dissapointed in a vr, like fov/res but when they start pay attention to the content, priorities change, and when previously points that bothered most get inimportant like resolution (to some degree) and other start to play key role like performance , fogging, comfort, eyes fatigue, ease of use etc

However, keep in mind that everyone has their own subjective opinions and what they value in a VR experience.

In a cake what is the most important ingredient the flour, the milk, the sugar, the butter or the baking powder?

all ingredients must be there in a respective ratio to produce the desired taste beyond : 90Hz 4k / eyes FOV and picture quality become prevalent

when they start pay attention to the content, priorities change

Very true, It’s like well fed people arguing over what side dish is better. But to someone with less $$ the choice means nothing.

I love the fov and res of the Pimax, but now that I ha e an hmd with wireless (Quest 2) suddenly the 8KX looks less appealing even though its superior in some obvious ways.

It’s hard to go back to a wire honestly.