Last year Pimax declared the coming of the 12K QLED. Though the trials and tribulations of Covid-19 impeded our journey to a better virtual reality, we are pleased to announce that Pimax’s constant efforts in VR research and development have reaped an interim harvest that we are ready to show our users.

We are happy to invite you to the Pimax Crystal Launch Event scheduled on May 31st, 1 p.m. PDT on Youtube, Pimax official channel . 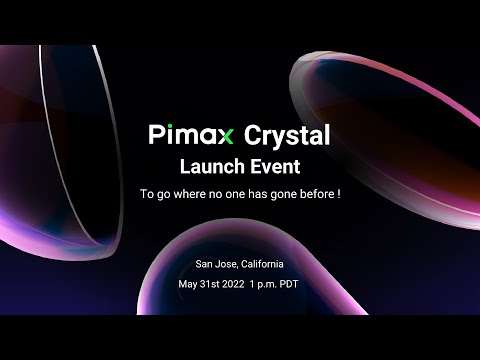 Further details can be found on Pimax official website (https://pimax.com).

What new device or technology do you think will be showcased at this event? Please leave a comment below, and one lucky member will be chosen to receive a mysterious reward!

Maybe a standalone headset with 8K resolution without pc support. So in essence an 12k with current gen display and without wigig support

I’m hoping for an AR faceplate (or dedicated headset) with really good sensors for 3D depth sensing / room reconstruction. And an SDK for it

You would think the SDK would be the easy part, but in the year since thre Varjo XR-3 came out, they still have not released an SDK that includes support for 3D reconstruction, though the headset has both cameras and Lidar for that.

I’m guessing the release date will be…today. They said something about a “mind blowing release date”, I can’t think of any other release date that would be mind blowing. Like when Sega announced that the Sega Saturn…”is already out! If you go to a game store today, you can buy one!”

Yeah, saw the announcement. Some kind of stand-alone headset, presumably. Will probably check the forum in a couple of days again to see if anything of interest was shared. Likely aimed at those who rule out to get any Meta product. As that does not include me, I much rather wait for the Cambria.

In the meantime Apple’s appearance on the VR/AR market is about to take shape, they are rumoured to introduce RealityOS during WWDC (likely during the keynote on 6 June) as a first of three steps with the release of the Apple headset in early 2023 as the culminating point (see Robert Scoble’s tweets - I know, he has announced Apple’s headset since years, but this time the plot seems to thicken). This promises to be fascinating.

Hmm, I guess the XR2 integration with all it’s features and requirements and the eye tracking might be the most time consuming part of the 12k implementation (even though - if they want to deliver by end of Q4 at least the hardware probably has to be final by now…)

A low hanging fruit might be to just take the lenses of the 12k and stuff them into an 8kX. On the other hand they probably want/have to maximize the customer base for their upcoming standalone platform. But having headsets with the XR2 chip but not all the extra eye tracking etc. features of the 12k would lead to fragmentation from the start and make it more difficult for developers to write applications that make optimal use of these features - if they cannot rely on their existence.
So not sure whether a new headset without XR2 chip (or XR2 with only a subset of features) makes sense for Pimax. We’ll see…

Edit: On second thought - if I remember right they mentioned the most difficult / work in progress part of the 12k is actually the wifi. So perhaps the XR2 and Tobii features are done and they can release an 8kX with 12k lenses, XR2 chip and eye tracking (and thus be 100% “app compatible” to the 12k) - but solely cable bound for SteamVR content?

It’s going to be very fun to watch the reactions to this.

Ooo, I thought of an even more mind-blowing release date. “You know those 8KX’s with a different firmware version that started showing up? Here’s a firmware update that’ll turn them into 12K QLED”

Yeah I remember that, that was a good one!

Are those new Lenses see in the poster…

Drop in replacements for the 8KX maling it Crystal Clear

I know it’s a standalone HMD because Pimax will want to build their storefront. But past that, I expect 1 of two things

A: I expect a more budget entry in the reality line, that the Pimax Crystal will serve as a more entryish level HMD so that Pimax will have an example of what they have for the lowest end and the highest end between it and the 12k.

B: Pimax will be stepping a little outside their niche and trying to make a smaller form factor HMD a bit more in line with the rest of the industry and pancake lenses, but still trying to expand the FoV a bit in that form factor, even if it’s not as wide as their other offerings.

Perhaps there might even be a little bit of both. If they make a budget, Artisan 2.0 kind of device maybe they can go with a smaller form factor with the advancements since then, because it had less FoV than the other HMDs.

If it’s anything like the frontier event there should be plenty of interest!! Good luck to you and the team

It is very similar to Frontier and we are still evolving the major event format.

More talk of some future headset that one day will be released and might or might not have all the promised features. Call me cynic but not getting excited at all. I mean what did all that 12k talk get us?

I mean what did all that 12k talk get us?

We said Q4 2022. That time is not upon us yet. As for being a cynic or whatever I’ll leave that to others to consider if they think it’s important.

They’re announcing a new headset also in the Reality line which will be in the $1000-1500 range to fit the role of a more direct replacement for the 8KX. It will have the same/similar housing as the 12K. It will probably have an 8K display and will delete a number of the features from the 12K. But it will still be the same overall format of headset. It will have an XR2 and will still have eye tracking because these are integral to the Reality series design and can’t be deleted. It will initially have standalone and wired PCVR support only.

It will have a release date earlier than the 12K’s December. Within the next 3 months. Getting it out earlier will draw a lot more customers as a lower priced platform while also getting some experience with the platform in customers hands to debug issues ahead of the flagship launch of the 12K.

One thing I thought was very interesting about the recent interview with Pimax on MRTV was all the discussion about how Pimax has grown into a much larger company, and how much things have changed and formalized at the company. And yet, it hasn’t seemed like we’ve really seen those changes in the support of their current product line like the 8KX.

I suspect this is because their new A-team has been completely focused on the new Reality series, and the existing product line is just being vaguely supported in the background. Maybe by just a few of their original employees that didn’t move on to working on the new project or something. I think for a good while now Pimax has considered the 8KX and the rest of their prior headsets to be legacy equipment they’d rather get rid of supporting, which is part of the motivation for their trade-in program. But at the same time, they had to keep the doors open until the launch of the Reality series.

Underlying these changes is that the Reality series is Pimax’s first major product that isn’t a Kickstarter project. I suspect strongly that much of Pimax’s foibles and reputation has been driven by the fact of being a Kickstarter company. For each project, they’re making promises of both functionality and deadline up front. It makes each project into a mad dash which eventually falls short of its promises, and it ends up with not quite finished projects being shoved out the door and never really finished later because the company is immediately off onto the next Kickstarter project mad dash again.

But the Reality series isn’t bound by Kickstarter promises and deadlines. So what we’re going to see now is, for the first time, Pimax product releases being driven by what’s best for the product.

Pimax mentioned during the MRTV interview that they were already working on the Reality series before the 8KX was released. That’s over three years! Given this and where they seemed to be with the engineering during that interview, I suspect that their December date is actually conservative. And they were holding back on announcing this second headset that was going to have an earlier date until they felt fully confident they could hit that earlier date.

Everyone was shocked by Pimax’s 12K announcement, and there’s a lot a skepticism about Pimax’s claims. But I suspect that Pimax was holding back, and they’re actually even farther along than they’ve let on. And maybe that’s what they’re about to present.

Putting my money on a new headset with advanced optical system mentioned at the end of Frontier event. Likely to compete with the Var jo Aero

I hope whatever pimax announces use decent screen panels that produce good colors. The better TV I purchase over the years it’s getting harder day by day to put on a VR headset and play, because I instantly notice the vast color capability differences between the two. Playing a game with vorpx, yeah 3d is great but the image quality and Colors are massively lacking almost like you got a 12yr old tv trying to game on that, I would just prefer not to have the hassle of wearing a headset and just game on a decent tv. 8kx the only value left for me atm is to trade it in for the new next gen headset, I hope pimax next generation headset would be much much better than what currently is.