The fact that a headset platform will exist that offers interchangeable optics presents amazing possibilities.

Imagine one day pimax decides to release some Holocake lenses that could essentially replicate the 5K Plus’ normal field of view mode without sacrificing any resolution compared to the 5K Plus.

We have a platform now that has versatility that the VR industry hasn’t seen before.

The thought of having one device that can be adaptable just makes the device such a cool possibility.

I was thinking about a possibility for a super resolution concept. Take a look at this video 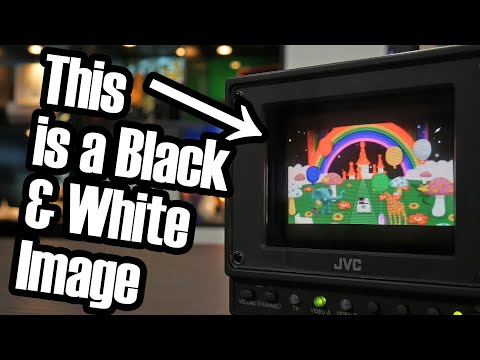 This is a design of CRT TV called lccs or liquid Crystal color shutter. It got me thinking about the old lenses on the Pimax 4k HMD

The 4k had an active shutter glass incorpirated into the lens so that the headset could accomplish a low persistence effect in spite of the panel being too slow on its own.

What if you did the same thing, IE putting an active shutter in a lens, but instead of one meant to lower persistence, you have three shutters, a red a green and a blue maybe even a quantum dot color polarizer layer to add color temporally like a DLP or like this lccs display does.

If you ran the headset in 160 Hz mode and you fed the panel a staggered / 1/2 pixel offset black and white image, you could get a super resolution effect and then add color to it by mimicking what this monitor does with its Liquid Crystal color shutter.

It would work like the old Cascaded LCD prototype that Nvidia made in 2016, but you could do the effect in software, and use a lens that has an active shutter layer with color filters to get a higher resolution image on the same panels.

I’m ultimately more interested in some sort of displays with emissive individual pixels, without any light-eating filters or semi-reflectors between the array of light sources and the viewer – as few losses as possible.

Currently waiting for my Tilt5 glasses (/me just had to back for the larger game board option, which ended up shipping later).

These have lcos projectors, which do sequential colour by switching red, green, and blue LED light sources, but their image-producing element is LCD, so it only lets part of the light through, even where maximally transparent.

In addition, the glasses use a 45° pane of glass in front of the wearer’s eyes, to make the image beam out from in front of them, instead of from slightly above them, and another set of polarisers to eliminate the last bit of cross talk between the eyes, which remains even if the retroreflective projection screen material has an outstanding gain value, both reducing the input-power-to-received-light efficiency further.

The nice thing about sequential colour is of course that the whole pixel gets the colour, and not just a third of its area.

The glasses have by necessity reprojection on-device, since head motion between each colour pass needs to be accounted for, but I am sure there is still some rainbowing - I’ll get to see for myself soon enough, I guess… :7

@jojon Yeah tillt five is awesome. I remember back during the cast AR Kickstarter days. I wanted to get one of those with a ton of that retro reflector material to do a kind of DIY cave setup.

I also thought it would be really cool to get a Stargate infinity mirror model, and replace the mirror with cast AR retro reflector so that you could actually get the gate effect on the Stargate in full 3D.

I was just looking for a way that pimax could reasonably do a super resolution concept akin to Nvidia cascaded displays on the pimax crystal platform that would actually be workable with something they’ve already done.

Using active color shutters incorporated into a lens like they’ve already done with the 4K and doing some creative rendering on the panel side could get you at least a perceptual doubling of resolution, and that would be useful if they ever wanted to put out a set of lenses for a wider field of view on crystal headsets.

I just love that the platfirm s so versatile.

Being able to take out those lenses means that you could extend the life of this headset for a long time with creative software tricks and new lens designs. I was just trying to cook up an idea off the top of my head based on what I’ve seen done before.

I hope you enjoy your tilt five kit. I remember sending Jerry Ellsworth an email asking her about the cast AR projectors.

From their early designs it looked like it might have been mems-based, which I thought was insanely cool, but she told me it was all custom fabricated LCOS based, and that they just ran at a really high frame rate.

I was hoping they were using MEMS based laser projectors, like the kind the Nebra Anybeam uses because it would have been cool for a Mame cabinet.

If they had used mems-based Pico laser projectors with a Cast AR hmd configuration it would have been the Ultimate way to get a CRT replacement for arcade cabinets.

Have you seen MEMS based projectors? They have wickedly low persistence. The brightness on them is absolute garbage, but with that High Gain retro reflective material they use, I was super curious so I had to email her and ask lol

I hope you enjoy your tilt five kit.

Have you seen MEMS based projectors?

Nope - closest thing I’ve experienced would be my old DLPs, but that’s rather a different thing - haven’t even seen one of those old spinny mirror laser effects more than a few times (never mind my lighthouses :P) – it amazes me that a mechanical device, no matter how small, and how minute the motions, can scan out a whole image fast enough. :7

I do recall the MEMS device that guy built, who was with Oculus in its earilest days (don’t know whether he was still around for the kickstarter), which would scan its field of view for a target reflector, and then keep a solid lock on it, no matter how erratically you moved it around (drawing a neat infinity symbol, centered on it, to detect where it was going). Wonder whether he ever tried to make any sort of product out of that – I imagine camera tracking using plain image analysis was already solid enough by then, to obsolete using any such separate specialised solution for that purpose. :7

I guess we’ll see what ever options Pimax comes up with, over time, for the Crystal lens mount points… :7