@Neoskynet made a post a while ago about Pimax copying the Oculus Go aspheric lenses but enlargening them and using less magnification, so we have a lightweight plastic aspheric lense similar to what StarVR uses to achieve wider fov with no distortion.

Proposed solution for a better Pimax 8K by Neoskynet

However, I repeat again, the best option now is to copy, copy and copy. Now there is probably no time or money for R&D. It is simply a matter of copying the excellent lenses of the Oculus Go and making them much bigger (similar to the StarVR so that everything is a magnification lens and without a useless flat area), with less magnification to cover more screen area and also to move our eyes/eyelashes/glasses away from the lenses and, if possible, make them oval, but this is secondary because of the cost of R&D that would be involved.

The ultimate test is to compare Pimax 8K to Pimax 4K. It is not acceptable for Pimax 8K to look worse than Pimax 4K in terms of resolution, sharpness, SDE and visible pixels.

Wearality made a headset which they sold to Lockheed Martin. This headset looks like a normal headset, but it actually has 150-180 degrees of perceived FOV because it uses really large circular lenses, and even larger displays by attaching a tablet or note sized display to the headset. You can turn a 120 fov fresnel lense and even a 3.5 inch display per eye if you make them both big enough, into 180 degrees of perceived fov. This way also has no distortion as you’re not stretching a 1:1 or 5:4 aspect ratio rendered image across a wide fov lense into a 16:9 aspect ratio.

Index actually is only 100 degree horizontal fov lenses (115 diagonal), but it can be up to 130 degrees of perceived fov with the lense to eye distance adjustment bringing the lenses closer to the eyes. (Eye relief mechanism)

@apple @hammerhead_gal @PimaxQuorra @Alex.liu The Wearality headset below is like Valve Index style technology and lenses but to the extreme. Just by using large 5:4 or 1:1 aspect ratio displays like Index uses but bigger in size; reducing lense magnification; and making lenses larger - you can have 150-180 perceived fov on a 120 fov render and 120 fov lenses, without distortion because you don’t have to stretch the image, and only using 2 rendering viewports like all major headsets currently use.

Is it possible for Pimax to look into either making a super large 120-150 fov fresnel lense with lense to eye distance adjustment for 150-180 perceived fov similar to the 150-180 fov Wearality headset in the images below and Valve Index uses - if Oculus Go like wide fov aspheric lenses made out of lightweight optical plastic, similar to StarVR as @Neoskynet suggested can’t be made?

It’s not fair that the military get to have the wide fov headset with minimal rendering requirements and minimal distortions like Index and we don’t, and I’m sure this could be reverse engineered. 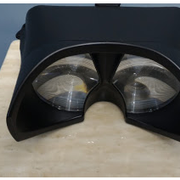 Sorry if I wasn’t clear enough. Index like displays with the same aspect ratio but larger dimensions used with normal fresnel lenses which are scaled up in size with less magnification can be used to achieve 150-180 degrees of perceived fov, although the same could be done with enlarged optical plastic aspheric lense like with oculus go/Star VR.

This can be done using normal rendering techniques and pipelines that the Vive and Index use, no need to stretch the images out, so it should be looked at. I don’t think it’s been mentioned before at all, this would really be like a Pimax 4K with wide FOV, although it could have higher resolution than the P4K.

I’ve been saying this on this forum and Reddit for years now. They need to max out the fov slightly beyond human vision. Like starvr one but even better.