Have people had good results using the Pimax optical cable with the 8KX on RTX 30 series cards?

Using the old style cable directly connected to the GPU, it did work okay. I was able to run 90/75/60Hz. But in my studio, that cable by itself is too short. I have the optical cable, and although that works fine with my 2080Ti, I get sparkles, flashes and artifacts with the 3080 at 75/60Hz and it refuses to show an image at 90Hz at all. 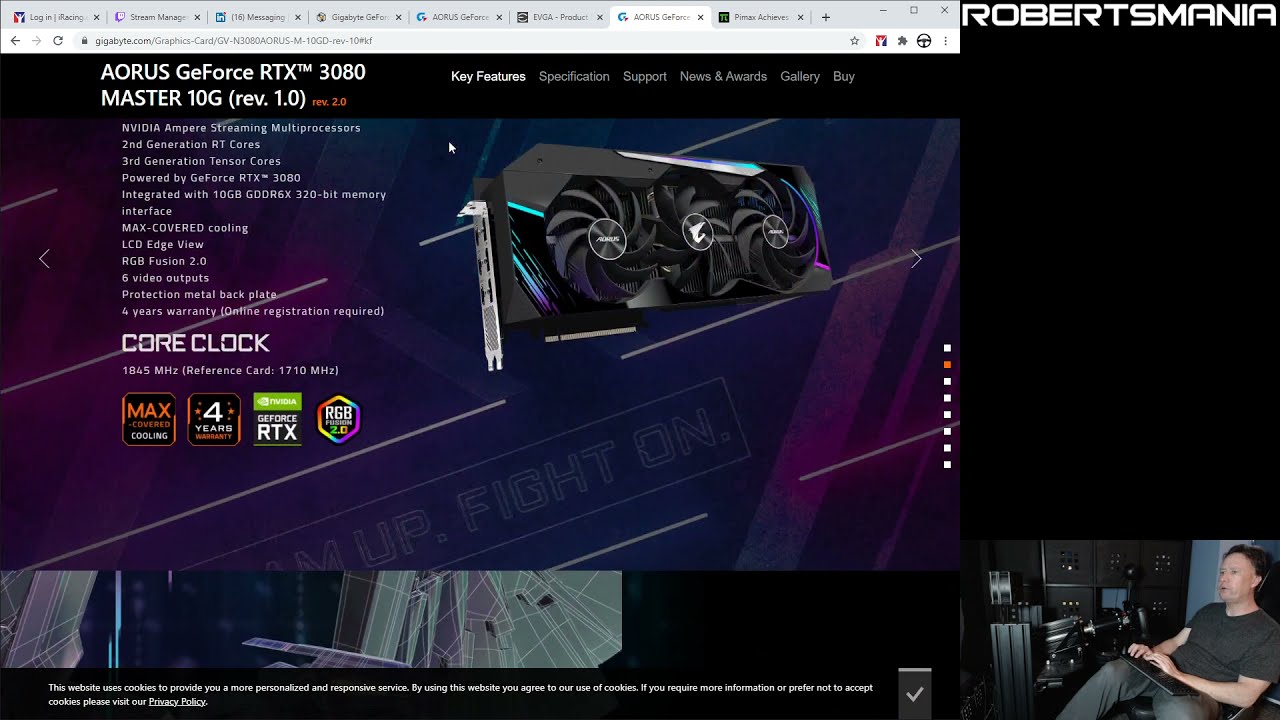 I dont know if its a DisplayPort signal strength issue with that particular card, that model/brand or something that would present with any 3080?

If you are running a 30 series card with the optical cable on your 8KX, let me know which model and brand.

In another forum, some responses indicated there may be more issues with 30 series cards that have more than 4 outputs. Suggesting there could be design considerations with the ones that have 5 or 6 HDMI/DisplayPort outputs and the signal strength from the amplifier(s) on the card.

Thanks for the replies and discussion. For this issue, I do not believe the problem was with the Pimax 8KX headset or cables.

The sparkles presented with that particular 3080 GPU on all the DisplayPort outputs when using the optical cable. But using the same headset and cable with other GPUs and other computers - there were no sparkles or issues.

Indeed, now that I have the Zotac 3090 everything is working fine and the performance is splendid.

Hah, dejavu from the iracing thread

Have you tried all 3 of the DisplayPort outputs? I’ve heard that some ports work better than others (for no apparent reason).

I know you were asking about 3000 series cards, but I have a 2080 with 5 outputs and it works fine with Pimax’s optical cable.

Unfortunately, I don’t think that will help in this case, since he’s using a fiber optic cable. Ferrite chokes are intended for electrical cables. Yes, the fiber optic cable also includes a copper USB cable, but I doubt that is the source of the sparkles.

Wasn’t sure. Figured it might be worth a try if it is maybe getting interference from having the extra DP as he had mention some were thinking. But guessing might not resolve it if the interference is internal.

I recall the 10series had issues on 1070 and 1080 models based on the reference design. So this could be something similar in the design.

Does anyone have experience with this Gigabyte RTX 3080?

Today I “won” the option to buy it in the Newegg shuffle. Buying it, without hesitation considering how hard it is to get these things.

But I am worried that it’s too similar to the first card. Same brand, 6 outputs… and yes I did try all the ports on the previous card with no obvious change in behavior.

I hope it meets your needs. Personally, I’m not going to buy a graphics card with only 10GB. MS Flight Simulator recommends 11GB for VR. At this point, I’m seriously considering waiting to upgrade my 2080 to a 4080. It looks like the next gen will appear next year and be noticeably more powerful.

Well the leaked MSI 3080Ti at 12GB seems like it will just scrape by.

Its weird do you think nvidia would push 4080’s out so soon considering they barely got to sell an 3080’s due to chip shortage?

They have done it before.

The (reliable source) rumors are that nVidia will be releasing the 4000 series asap (probably mid-2022) to get a leap over AMD and that the cards will be 50-70% faster than the 3000 series. That’s because the cards will be produced on a 5nm process, so more cores and better clock speed.

Definitely some differences between the 4 outputs on the card

I posted about this a few months ago, my Gigabyte 3080 OC Gaming gives snow on one of the DP ports. Let’s all hope no one experiences snow on every port.

I did have sparkles/snow on every DP output on the first Gigabyte Aorus Master RTX 3080 I had using the optical cable. The old/standard cable connected directly to the GPU did work okay.

Are you using the standard or optical cable?

Installed the card and so far all is well. I am able to use the 8KX in 90Hz with the optical cable and it just works.

The performance is amazing with the combination of the 8KX HMD, an RTX 3090, a 5600X CPU, and 3600 CL14 RAM. My primary application is iRacing and I can run higher resolution than I was ever able to before, enable more graphics options and still hit 90Hz.

Its weird do you think nvidia would push 4080’s out so soon considering they barely got to sell an 3080’s due to chip shortage?

This is all gum-flapping and wishful thinking.

I doubt the situation will be any different next year but I guess nVidia needs to keep the product train rolling.

Yes my 2080Ti is a Zotac. Ive had many. They are always the cheapest, ugliest and least desired of all the brands but they work just the same.