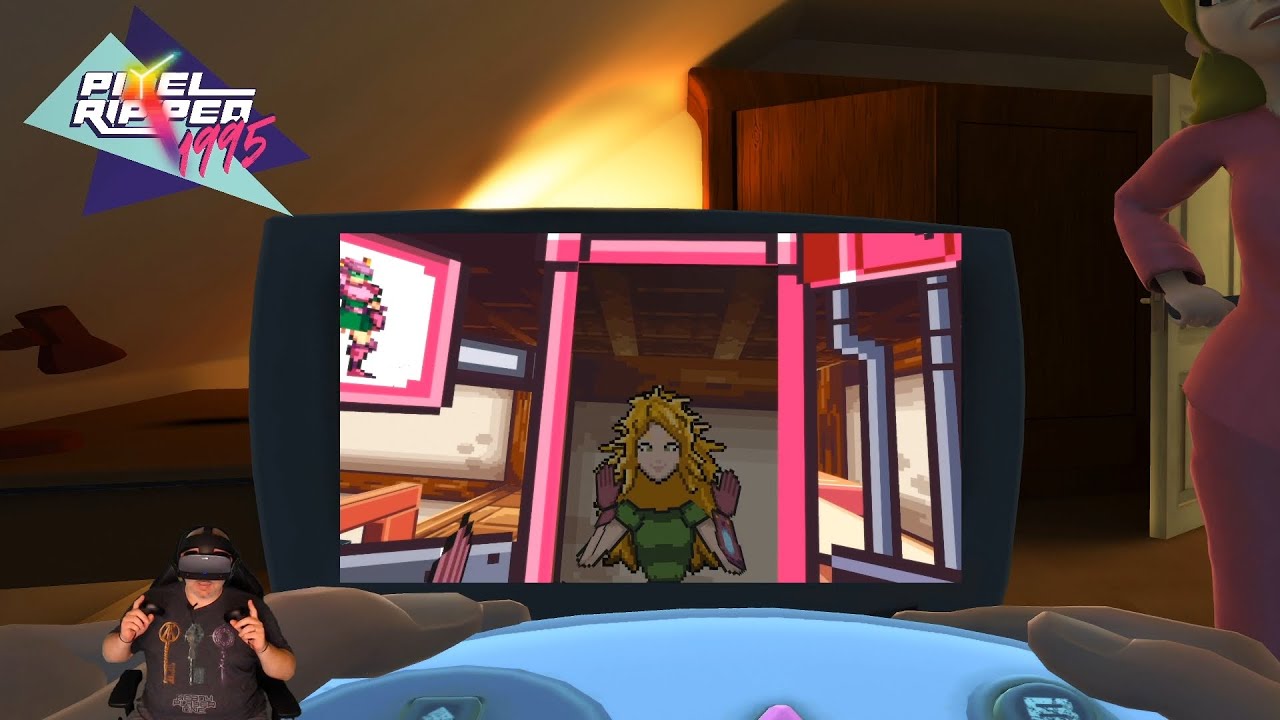 Today we are finally getting our first look at Pixel Ripped 1995 the latest game from Developer Ana Ribeiro and Arvore. This latest release is the follow up the their successful first game Pixel Ripped 1989. I have to say it has been awesome watching this game franchise grow up over the years. I remember fondly the first time I saw the framework for Pixel Ripped 89 and that was from an old demo that was available on the now dead Oculus share site back in the developer kit days. Long gone are the days of Pixel Rift but it is truly amazing to see what that little demo has now grown into!

I have to say that I am loving this game so far… The combination of the 2D graphics and 3D environments is amazingly well done and coupled with the great animations and soundtrack complete with decent music and voice acting and I feel this game is a complete home run! Now with that said I will knock off a few points for the soundtrack getting somewhat repetitive. The background dialog tends to loop after a while and while it is very entertaining and sometimes downright LOL funny it can get annoying when you are stuck on a gameplay sequence and the mother keeps saying the same things over and over again.

Unlike its predecessor Pixel Ripped 1995 has different environments and gameplay styles mixed throughout the games 6 levels. Overall it took me around 4-5 hours to play through the entire game but I was taking my time to look at all the awesome Game Hero cards laying around with some of my favorite content creators on them and maybe if you look hard enough you might even find me in there too! []-)

So if you want to grab a copy and check it out for yourself you can head to the store of your choice at one of the links below… Currently the game will be available on 4/23 in the Oculus store for Rift and Quest, Steam and Viveport and will be launching at a later date for PSVR.

I need a solid answer. Help me @vrgamerdude you’re my only hope.

Well yes and no… At first it wouldn’t let me get past the re-centering screen in the beginning because it seemed to be looking specifically for the Touch controllers but pressing “R” on the keyboard fixed that. After this the game would appear on my monitor and then would eventually make it to the headset… almost as if it was taking a bit for the video image to arrive. I also noticed that is was during these times that it my headset would lose the base stations briefly and once they came back is when the game view would appear… IDK if this has something to do with the game comparability or if it has something to do with my 8KX specifically in this game since it isn’t doing this with any other fame and doesn’t have any issues playing the Steam version of Pixel Ripped 95. I am planning to do another video of this game in the 8KX since I just found my “Game Hero” card in the game so ya know I have to show that off! [;]-)

damn, its espire 1 all over again.

if i didn’t have a quest life would be so much simpler.

Right, I bought it on my quest as well. Great game, bummer to hear it isn’t working too well with pimax yet.

No it works with primax you just have to use the steam version of the game!

ahh I see, I own the oculus version because of the quest. Indeed a bit of a pain to have two separated libraries of vr titles. Luckily 90% of my library is supported through revive so I’ll cut my losses and enjoy it on the quest

They did a great job visually for the hardware, doesn’t look much different than the desktop version, though I’m sure it’s a treat on high end gear.

This is the dilemma, Quest is too awesome not to buy it for , so if you have a quest and a steamVR headset, ideally you would buy the oculus version which has crossbuy, then use a tool like revive to run the rift version on pimax
@vrgamerdude did you try with revive as well?

True and no I didn’t try it with Revive.

can you? im curious…

Sure thing… Worked great with Revive! I had no issues with re-centering or starting and playing the game… ran smooth as butter in the 8KX with no PP and even a bit of SS on my old system! [;]-)

Wow nice. I figured that sometimes Revive might do what Pitool don’t on occasion.
I’m more inclined to buy now. Thanks!