I currently have an Index and I decided to try and simulate the 8KX in its Native (Max FOV) resolution. I set SteamVR to render the image at 358% (couldnt quite get it to 360%), then I set the refresh rate to 80hz. I chose appx. 360% because the Pimax 8KX resolution is 3.6x that of the Index.

Is this a good way to simulate the 8KX’s performance? If so then that makes me a happy camper because it ran quite well!

Thanks for the link, but I’ve already seen this. While its a great video it doesn’t really address the point of this topic.
I don’t have the same specs as him, and he’s running an actual 8KX. My post is about accurately simulating an 8KX’s load on my own rig without an actual 8KX and addressing if the simulation is representative of the real thing.
Thanks

What GPU and CPU do you have?

Is this a good way to simulate the 8KX’s performance? If so then that makes me a happy camper because it ran quite well!

While generally in pancake gaming there is a direct relation between the rendered resolution and the performance, this cannot be directly applied to VR headset, because (and in particular in your case) they can differ not only by display resolution, but by the FOV as well.

In other words, even if you match Index and Pimax config by a pixel count, Pimax may be rendering easily twice as many objects as well, thanks to the superior horizontal FOV, and have the performance requirements much bigger than Index.

If you can match both, the FOV and the resolution, the performance requirements for the rendering should be pretty much the same.

The only difference could come from the way the pre-lens warp distortion is computed on 8kx and 5k.

8kx output (4k panel) is technically twice the size in pixel count to 5k+/8k+ output (QHD panel), so the final step may take twice the time.

so the final step may take twice the time.

But that is not a big difference right? So it should serve as a good benchmark. I’m gonna try this out later.

This is exactly what my spreadsheets are supposed to be used for. Your current headset (ideally another wide FOV headset like the Pimax 5k+) and the maximum resolution you can run it at go at the bottom, desired parameters for the future go at the top. The “Load” cell will be >1 and colored red if your desired parameters require more rendered pixels.

It so happens my spreadsheet includes “Valve Index” as a drop down option for precisely this.

Now, yes, what you have done is an ok way to simulate the 8kX’s performance. However, since you did not use my spreadsheets as intended, there are some caveats to be aware of.

Please download and read this spreadsheet. I put in your test data with some conservative assumptions for things you did not specify (ie. framerate, in app supersampling). Load factor was a very promising 0.297 (<0.5 limit theoretically for narrow/wide FOV change) from the same settings I used with DCS World and the Pimax Vision 8kX. This is very promising for you (though of course only valid as long as the application tested is the same as that used with the 8kX). 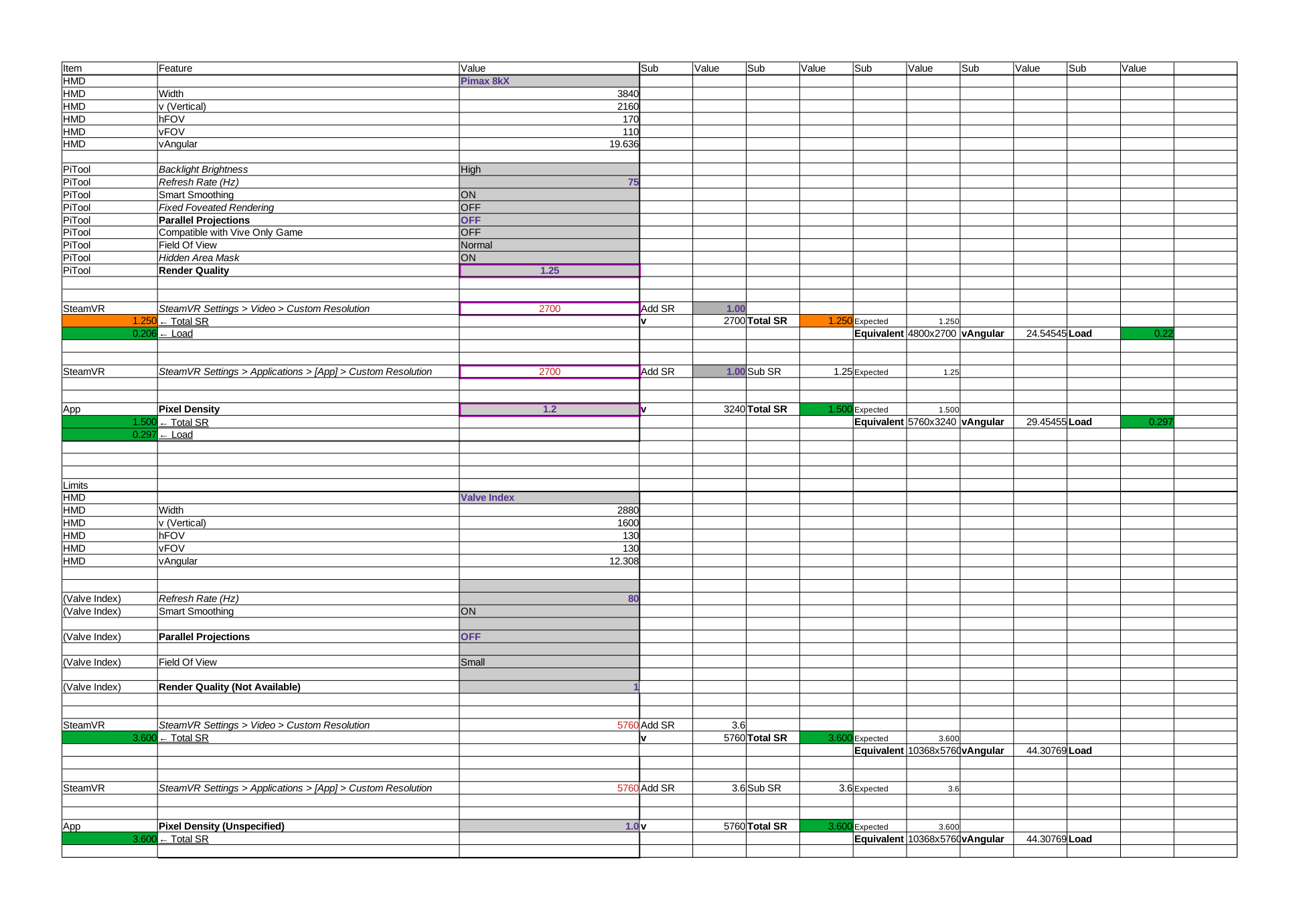 But that is not a big difference right? So it should serve as a good benchmark. I’m gonna try this out later.

Hey mirage, thx for the spreadsheet. I am a bit confused on some of it to be honest.

Q’s:
Can you explain why/how to tell that the performance looks promising using the spreadsheet? Seems to be tied to the load factor.

When I change the Pimax 8KX FOV in the drop down none of the other metrics seem to change. Are they not supposed to? Ideally I’d like to try my hand at max FOV native.

Can you explain what you mentioned about the load factor?

@risa2000 Even 1ms vs 2ms can be enough. The margins can be astonishingly thin for many use cases.

@x15adam
Yes, performance is entirely tied to load factor. Load factor is total rendered pixels rendered, times framerate and such, in proposed config up top, divided by what is put in as a tested config at bottom. Less than 1, fewer pixels are being rendered than you have tested, so PASS/FAIL.

Supersampling, Framerate, Parallel Projections, and anything else I can derive a hard number for, goes into the Load factor.

FOV, due to distortion correction and other possibilities, would require a guesstimated arbitrary penalty to incorporate into the load factor as PASS/FAIL, so it’s just a bit complex to automate for now.

Ideally, test data should be from a Normal FOV headset like the Pimax 5k+. However, when the tested FOV is narrow, the proposed FOV is wide, a 0.5 load factor would theoretically be the PASS/FAIL point (because, half as many pixels). However, I say maybe 0.4 load factor should be considered PASS/FAIL in this case, due to … distortion correction etc.

The stuff below the VR rendering about hardware… all I need was the CPU/GPU. Your GPU is already the same type as mine, about 200MHz lower clock, so 90% on all metrics there. Your CPU is about 90% of mine.

Thanks to that last bit of info, I can confirm you should just be able to use my settings for the Pimax Vision 8kX, minimal tweaking required.

However, you should download the overclocking tool for your GPU. It will probably run at 1925MHz core clock or thereabouts, about 100MHz more than what you have now, and 100Mhz less than mine.

Some wierd stuff also needs more VRAM, like setting textures to max on DCS World so the kneeboard on the pilot is readable.

You should probably NOT upgrade your GPU until more is known about the NVIDIA 3000 series.

@Davebobman You shoulda kept your comment, was pretty funny. Goes hand in hand with the “nature” post from earlier. I mean for 1,400 bucks it damn well better be ‘stimulating’ too lol.

Well, now I guess I have to repost

A bit off-topic but I initially read the title as “Stimulating 8KX Performance”. I thought that maybe you were enjoying the 8K-X a little too much

As for simulating 8KX performance, it has similar requirements to the 5K+ and 8K. The difference will be in the amount of SS, but the render size is what matters. Similar sizes and refresh rates will yield similar performance.

Your system is fairly similar to mine (my I7-8700K is not overclocked) and the rest is roughly equivalent. I have an 8K and tbh, my system feels a little underpowered for VR at this level.

I plan to update my GPU in the next year or so, which I think will help the 8KX to really shine.