I own the model.

Complete, unassembled, and not for sale, but here’s one that is…

…I might actually assemble it one day, but in the meantime it just gets more valuable. The included booklet is actually quite interesting and Bob Lazar is convincing imo, especially considering the (fairly) recent videos released by the US Navy/Air Force. It appeals to the part of me that enjoys Elite D. 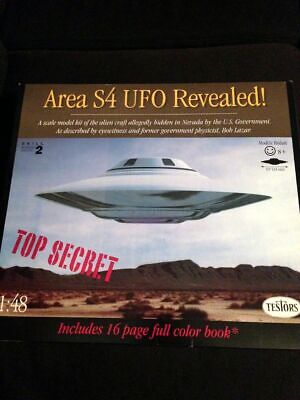 Age to box may include minor scuffs or other age related defects. Also present is the booklet describing the craft. Lazar's story has since been analyzed and rejected by skeptics and ufologists alike, including researchers at the Massachusetts...

Cool I have been thinking of buying the model of the Discovery from 2001 space odyssey for my man cave . But it’s bloody big

Yes, it is big and fairly expensive. My understanding is that it includes a long steel bar to keep it from sagging.

My wife is a huge 2001 Space Odyssey fan. I bought her a 50th anniversary (of the movie) art book last Christmas. It was expensive, but it’s a much cheaper version of this $1250 one, which is now out of print too: https://www.taschen.com/pages/en/catalogue/film/all/03109/facts.the_making_of_stanley_kubricks_2001_a_space_odyssey.htm

Here are some other 2001 models that I have considered. I’d really like to have the moon bus, which I couldn’t afford when it was released (I was just a kid). The paper models are surprisingly inexpensive:
https://www.ebay.com/sch/i.html?_from=R40&_trksid=m570.l1313&_nkw=2001+space+odyssey+models

Open the box and build the awesome flying saucer . Who cares what it’s worth when you are pushing up daisies . Enjoy it now

I’ve opened the box, which was already unsealed. I bought it for research on a novel that I’m thinking about writing, if I can fully develop a decent plot.

Here is a novel I illustrated and helped develop the background material for, but the majority was written by a friend (under a pseudonym, so that it’s not associated with his scholarly works).

Wow the best price I can find for this model for is over $400 au at the moment . That’s going to be hard to get the wife onboard

Quite true. Here’s an interesting coincidence: We were watching 2001 again tonight, since it was on Turner Classic Movies. I found myself longing for the moon bus model yet again.

The previous time we saw 2001 was last year when it came to a local movie theater for the 50th anniversary. It was great seeing it again on a big screen. That was only the second time I saw it in a theater. The first time was back around 1974 at a $1 matinee.

Wow 5 months later . It feels like yesterday we were talking about 2001 a space odyssey

I am watching 2010 right now and it’s definitely an awesome underrated movie.

I am trying to find something to fill my spare time while I wait for the 8kx . The discovery model is definitely something I want in my man cave.

If I decide to purchase it I will try and paint it with a weathered look so it will be more like the 2010 movie . But at this stage I will wait for a better price .

Yes, the Discovery is an awesome model. My understanding is that it has a steel rod running through it, to keep it from sagging. I’m tempted to order one, but it’s been ages since I last assembled a model and I’d have to buy tools and paints and such. Also, the only place I could assemble such a large model would be on the (expensive) dining room table and I don’t think my wife would stand for that (even for a 2001 model).

The movie ship was newly made and therefor had no weathering. It is also a “clean” design in stark contrast to the “kit bashed” ship models which have dominated since Star Wars was released.

15 posts were merged into an existing topic: I purchased the Discovery One model to keep myself occupied while I wait for my 8kx

Should I start a new topic or stay on this one ?

Yeah I will start a new topic . People can choose whether they are interested or not

I split the conversation to your new thread. It’s now here: I purchased the Discovery One model to keep myself occupied while I wait for my 8kx