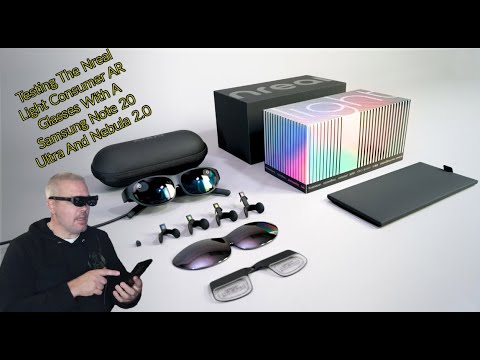 Today I am finally getting a look at the Consumer version of the Nreal AR glasses running on the recently released Nebula 2.0 Universal and all of this using my new Samsung Galaxy Note 20 Ultra. For those of you who watch this channel regularly you might remember that last year I was fortunate to receive one of the Nreal Light developer kits to review and I had a positive yet very limited experience with it since I am not a true developer yet more of a hobbyist… Because of this, there just really wasn’t much to do with the glasses other than simply use them as a mirror device for my phones screen.

Well flash forward to around a month ago and Nreal was kind enough to follow up on my initial review hardware by sending me the full consumer kit. When I received it however I was still stuck in the same situation… even though they had officially launched in China, Japan, Korea and now even Germany there was still nothing official to do with the glasses for those of us here in the US so I decided to shelve them for a bit longer. Well all of that changed last week with the release of Nebula 2.0 Universal! Now I could finally plug the glasses into my phone and use them the way they were intended to be used… With this release we finally got the ability to have an official UI and some actual AR games and apps to play with! So now back off the shelf they came and I thought it was high time that I did a quick unboxing and review of the new Nebula 2.0 software running on the consumer glasses.

So after my initial testing I am both happy and sad to say that most of the he go l jades capabilities are now working and quite well… with the exception of being able to add additional 2D apps from the Google Playstore. I was really hoping to be able to use the glasses to pin a large Netflix window in my bedroom without u us sun and Aircasting or grab a few 2D games from the Playstore to enjoy on a huge floating screen but Nope… that is not in the cards apparently unless you have a phone that has official support through one of the overseas Telcos that Nreal are partnered with… Unfortunately none of which are in the US at the moment! So currently all you can still do with the glasses is to view webpages and run web based apps as well as a handful of AR demos and a few games.

Either way, we are now one step closer to the Nreal light North American launch and I am hoping to see full functionality of these glasses here in the states soon! I also want to thank my good friend Erik Hartley for helping me with a few issues I’ve ran into and for providing me with a few of the demos i now have installed. Erik is a great guy and a true wealth of knowledge so if you get a chance make sure to drop by his channel and give him a sub and a like!

I have time stamped the segments for easy access for those who don’t want to sit through the entire 20+ minute video. thanks as always for watching this video and I hope to see you all back again really soon! []-)

Timestamps for those who want to skip around in the video: