UnBoxing 8K+ and a mini review

I just got my 8K + and will share an UnBoxing and “mini review” with you, as soon as I am ready (later tonight).

Edit:
Here is the Video - sorry its bad Quality, I am not a pro in doing that and the equipment as the rest show that - so sorry - also I normally do Screen Cast kind of stuff - but I had to quickly do some workarounds with OBS that I normally dont use - the sound sucks badly. Forgive me, and just stop if cant take it any more

Congratulations and looking forward to your impressions

Thank you for sharing. Hope you enjoy your shiny new 8K+ The packaging looks much improved.

Hi. Did you get charged import duty if you don’t mind me asking?

Hi and thanks :-).
I am just running through a couple of games - Alyx looks great - if you get the settings right - first try was bad, then I just went for the “Alyx” Settings from Pitool and it was much better - need to add the none optimizing parameters - its a pain if you are near 90hz and keep droping to 88 shortly and the game looks bad all the sudden.
Packaging is much better. Also the Velcro got improved, its wider (the straps) then before - still cant wait for the real head strap.
I did not get charged any thing as far as I can see - nothing from FedEx in my Mail or from the man at the door.

So in short as far as I got until now - its very nice to have less SDE - for me its a bit more immersion just by that then with the 5K+.
I have to fit the HMD to my Head again - some tweaking to get the sweet spot right.
Text is a bit more blurry - but largely depends on the correct position and IPD settings to hit the correct sweet spot. If I close one eye and just look at the text that way its at least as good. I guess I need to hit the IPD dials a bit more - the sharpest of the text is just a bit to the outside on each eye.
Alyx is very nice - it does look a bit smother than 5k+, but it adds to the film like feeling and no SDE makes the world more believable for me.
Skyrim looks very nice - in game you dont really notice SDE anymore, the world looks great!
ACC - the text seems a bit blurry, but its also on the limit with FPS anyhow - needs more tweeking - pumping up resolutions helps but then the FPS go bad. The SDE also does not show here.

Distortions - I have to say I never really noticed any - geometry distortions - for me zero. Lens effects? Yes at the edges inside and outside making the image get unsharp in that area - much like if you ever had glasses - its the same and I guess just the limit of what the lenses can do at that area. Worst part is that you need to tweak it to get the correct position and so a good image.
Is it worth the upgrade from the 5k+? It depends on what you are looking for. Less SDE - definitely. Perfect Sharpness - I guess its 5k+, Artisan or 8KX then - but that is if you really need to read the last instrument. Going higher in resolution helps the 8k+. I would say it is an upgrade picture wise from the 5k+, but if you never where bothered by the SDE - then it wont add much for you.
EDIT: My 2080TI ist pretty much at the same limit with the 8K+ then with the 5k+ - really wonder how a lot get along with less GPU Power - I Would love to but always have the feeling like needing a 3080TI SLI would not hurt…

Thanks for your impressions!
Which headset did you previously have? (To better understand what the “less SDE” or “more blurry” comparisons refer to)

One experiment: Can you please have a look at the initial screen with the recently played games etc. that you look towards in Steam home?
Look at the texts at the left and right border and then turn your head left and right. Does it get blurry at some angle?
And check the horizontal borders of the panels the text resides on. When in the center of the headset they are parallel. Do they stay like this when they reach the outer peripherial area? Or do they move/bend?

Yes the 5k+ since they shipped from kick start.
Before that a Samsung Odyssey (NO +) and first a Dell Visor.
I like the PiMax the most out of all of them - even if they are a bit tricky to get right.
On the other hand I was constantly fiddling with the Odyssey also since simply moving my had fast could get me out of the sweet spot. And I did not play as long since the way it mounted on my head was less comfortable for me then the PiMax currently is.
I always need to add like a centimeter on the bottom of the Velcro / foam so that i can hit the sweet spot. otherwise its to tilted it seems. That is absolutely identical on the 5k+ and the 8k+

You mean this screen? (Fast shot with my mobile through the lens) 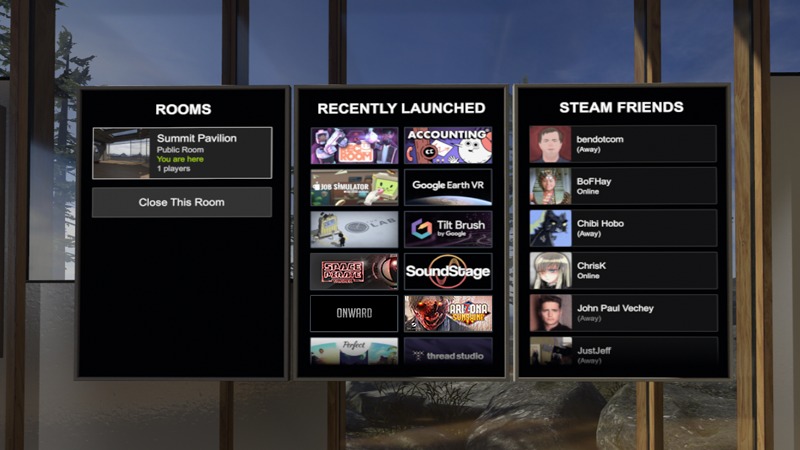 And there (in this example) E.g. the text Summit Pavilion. And as horizontal lines the white rectangular border around the summit pavillion text box for close lines or the upper and lower boundary of the Rooms panel for more distant horizontal lines.

On my 5k+ the text gets blurry when it leaves approximately the middle 90° and the horizontal lines are starting to bend (for me) in the outer region (visible in large and (to a lesser degree) normal FoV). Best seen when turning the head left and right in a smooth movement.
I only realize it in a more “synthetic” situation like this, in normal gaming it isn’t apparent to me.

I really tried hard, but the effect is, if there at all, so small I can not truly tell you if it is geometry bending or simply so far out that the lens is at its edge.
The effect of un-sharpness at the very edge and the effect of not having the HMD close enough or not 100% centered is definitely much larger.
I remember this effect from early versions of the PITool and the 5k+ - but have not used steam home for a long time and I am not sure if it is still there or got solved (for me?) with some update and better distortion profile.
And the Effect is also much more on my wide screen e.g. in Star Citizen then it is here on the pimax (on my monitor i can use the effect as a zoom option).

I have to admit, that for me with low IPD the lenses could move just a bit more closer to one another, I guess with an IPD of like 65 its perfect (mine is about 61-62).

Ok, thanks for doing this little experiment!
My suspicion was that one simply gets used to the distortion profile pretty fast and people like me and you who usually don’t see distortions might see this. And thus it might be the optimal distortion profile optimization test for Pimax

But apparently it’s not the case - so there are some people who really don’t see any distortions no matter what. Also good! (And even better for you

Yes, I really wonder if my brain sorts it out, if there is just the more or less compatible physiognomy playing out for the PiMax design or what ever… it would be nice to know :).
But from moving the device around my nose and all i have read in the years here, its harder to get a device set up perfectly then one might thing. I believe the more FOV the larger the effect and the harder to get it right for all types of faces.
Oh by the way I did the tests on LARGE.

EDIT:
A picture from my Monitor and a typical effect - LEFT the box is set to the edge of the screen and RIGHT is the box in center vision -> it generates a ZOOM effect.
I never noticed it that extreme in the HMD.

Oh by the way I did the tests on LARGE.

Oh, wow. With large it’s pretty obvious for me in almost any application. Sounds perfect! Then the Pimax is the dream-come-true zero competition HMD for you

well i have plenty of Ideas to make it better - like a none stop sweet spot over the whole lens - but i still remember how small it was on the older HMDs and the large SDE - so its just getting better and better.

Thanks for sharing the details. How is the FOV with the new interface? Also, how do you find comfort?

Sorry, what Interface do you mean?

Comfort is good but not much better than before for me - but it was already good. I still add some padding to the bottom. I hope the the deluxe head straps will come soon. It might make it easier to adjust. The current cloth is not bad - but also nothing out of the ordinary. It works, fits ok, but it needs some tweaking to get it to sit and fit right.

Another try at through the lens shot wit 2x zoom - from a soso mobile. but without holding the device still and a DSLR with macro its nothing sensational. Still the picture quality is good inside (well better then anything else I guess we will see soon