Valve Index vs HP Reverb - Which one is best (Video & Text)

My rough and ready video review or text if you prefer to read than watch video. Forget squeaky clean gaming spaces and fancy camera work this is raw-testing and non-scientific analysis. Not being paid by or influenced by anyone. Purchased both headsets with my own funds. Enjoy! 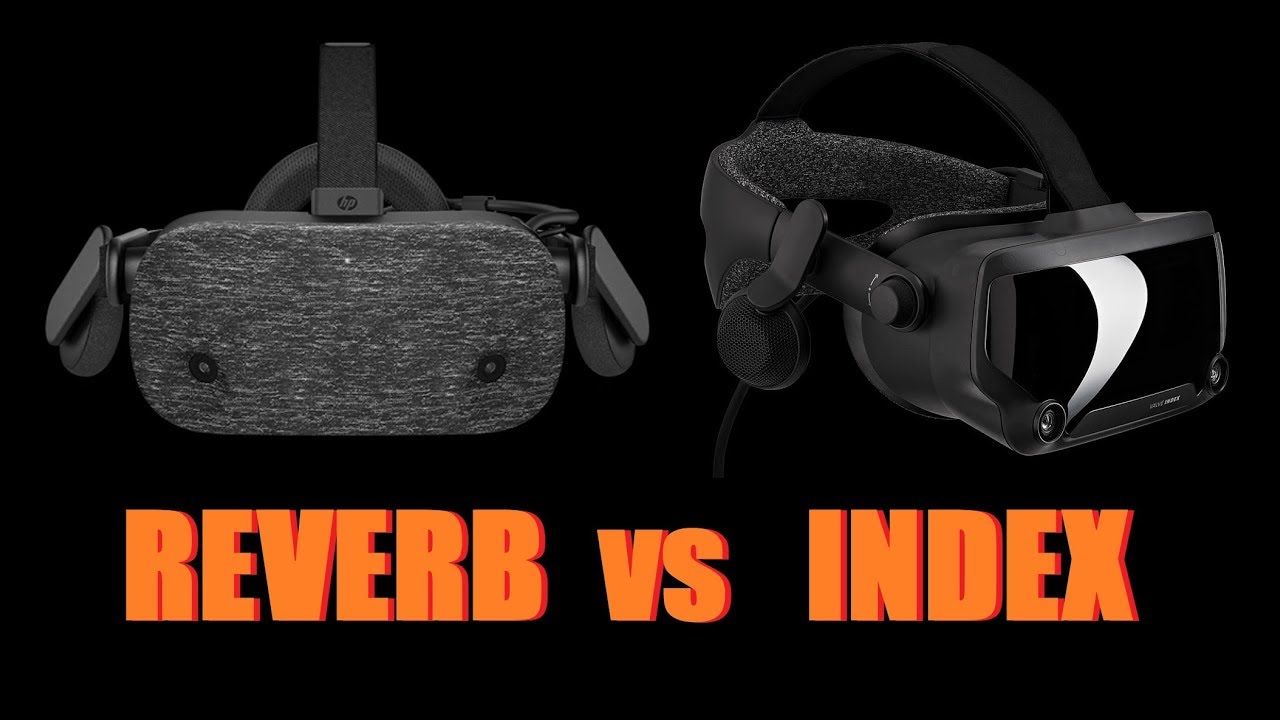 Before we start our look at the Valve Index vs HP Reverb let’s be clear that this is not going to be technical. We’re not going to break-down the specs and look at the finer details in any scientific way. Our comparison comes from using both headsets with the same PC, software and playing environment. Take a look at the video or read the transcript below.

To kick things off this is where everyone has to start and to be frank the Reverb has the Index beat here. Once you plug in the single USB 3.0, the Display Port cable, then open the Windows Mixed Reality Portal, it’s plain sailing. A process which literally takes just a few minutes. Setting up a seated or roomscale play area is easy alongside controller tracking. All the initial prep work is completed in moments.

The Index on the other-hand requires a single or two base-stations mounted somewhere in the room to cover the play area (each requiring its own plug socket). Valve recommends they overlook the play-area using an elevated position. It’s not difficult, but depending on your environment you might need to secure them firmly or invest in a set of tripods. Once in place though, again connecting the single USB 3.0, display port and power supply isn’t tough. But, that is three plug sockets potentially. Booting up Steam VR and calibrating from that is pretty painless and quick. Overall though this is a longer process than the ease of inside out tracking.

Both headsets have pros and cons in this area so perhaps a draw here. We won’t talk about the design aspects because frankly when you’re in VR what you look like from the outside has no bearing at all. Starting with the Index then and it’s a much heavier beast by far. The sturdy back strap and overall weight makes it one of the heavier VR headsets on the market. However, it’s very comfortable as a result. The design makes putting it on tightening the knob at the back and adjusting the screen-to-eye distance to suit very easy. A mechanical IPD adjustment also comes as a godsend for getting the right picture quality for your head-shape. With extended playing, the weight will impact comfort for some people. The design feels right for longer play sessions where the user can adjust the tightness without taking the headset off. Perhaps getting too sweaty might be a reason to call time though.

The Reverb comes in very light in comparison to the Index and does a grand job of reducing any light bleed from under the nose thanks to its rubber flaps. The Reverb looks designed for prolonged usage, however the inside cushioning and flaps presses against the face. You can mitigate the pressure slightly by loosening the straps. However, the straps aren’t as rigid or easy to find a preferred comfort zone like the Index. Therefore you will need a bit more fiddling to find the right fit. The cable though is quite heavy and pulls or rests on your shoulders. It’s a bit of a design thorn-in-the-side. Investing in a belt-clip could prove to be a good option to take some of the weight away. However when playing seated it’s a minor issue but noticeable all the same.

Again, both headsets exhibit definitive pros and cons in this area so it’s hard to pinpoint an overall leader here. Both use the same LCD type displays which means black levels are on par. However, the brightness and colour gamut of the Index offers a greater vibrancy overall. The eyes get used to what is in front of them but using the two headsets side-by-side and it’s clear the Index offers the best overall colours.

Where the Reverb simply beats the Index hands-down with no room for any doubt is its higher resolution. Perhaps the biggest strength the Reverb has over any other VR headset at present. It’s a night-and-day difference in games like Fallout 4 VR. Any items viewed up-close that show fine detail look much better on the Reverb, take the weapons in Doom VFR for example. The cockpit display in PCARS 2 or anything that offers distance detail. Rather than a blur, objects look crisp and clear perhaps on par with a 2D monitor at times. Desktop use is also clearer on the Reverb making it quite viable for working this way.

However, there are drawbacks which manifest themselves in the Reverb which puts the Index back into contention. The Reverb’s screen area of high clarity is quite small which requires the user to look directly ahead at all times. You move your head to look at things rather than your eyes. Once you gaze away from this central area the image loses the really sharp clarity. This is very apparent when using things like Virtual Desktop. The Index on the other hand feels more uniform and has a wider area of focus made even better with the adjustable knob to move the lenses closer to the eyes. This has the added bonus of increasing the field of view which is wider and taller than the Reverb.

The dreaded Screen Door Effect feels quite similar on both headsets with the Reverb almost eliminating it entirely. However, when viewing bright colours on a dark background the Index suffers greatly from glare or god-rays which is distracting at times. The Reverb doesn’t have as much glare but does exhibit some minor ghosting when moving ones head at speed and slight chromatic aberration. Mura is visible as well in some instances on the Reverb.

The Index has another trick up its sleeve and is somewhat future proofing itself with its 120hz and 144hz low-persistence screens. Playing fast-moving games at these high refresh rates makes quite a difference and beats the competition which maxes out at 90hz. There is a GPU requirement to run at these high refresh rates but in less demanding games the differences are quite remarkable. Movements feel smoother and presence increased as a result.

Watching movies feels quite similar on both headsets until you view 4K content which puts the Reverb ahead slightly in terms of sharpness. You are very much at the mercy of the source material and in both headsets a 1080p video isn’t going to look as sharp as 4K. Again, the colour settings of the Index feels richer but if your video player has some fine-tuning adjustments then a bit of fiddling can make the differences less-pronounced.

When it comes to audio the Index excels with its off-ear solution compared to the pads of the Reverb. The sound quality is far richer on the Index with a decent range of low-to-high frequencies. Obviously not as good as an expensive pair of cans, but still good for VR playing. One drawback or benefit depending on the scenario is the off-ear design means you can hear what’s happening outside of VR. This is either distracting or better for feeling less isolated – take your pick. The cones move up and down easily to suit the head-shape. An option to connect your own headphones is available as well but this adds even more weight.

On the flip-side the Reverb pads offer great movement to suit head-shape but click when pulled out. It feels somewhat cheap though as if they could snap at any moment. The sound quality is functional with less frequency range than the Index. You would need to push them into your ears to feel better bass response which isn’t practical. Again, a plus or negative depending, they touch the ears which means you can feel detached from the outside which is great in certain games. Not so good if other people are in close-proximity.

The Index instantly wins hands-down in this area. The lighthouse tracking verses the two camera inside-out tracking of the Reverb makes it a no contest. Tracking on the Index is pretty flawless and with the right two basestation set-up, no occlusion at all. The Reverb loses tracking quite frequently where room conditions such as bright light or lack of it in the play space impacts performance. As mentioned, the 120hz or 144hz displays of the Index means tracking feels much smoother and immersive.

The Index knuckles controllers versus the rather functional WMR controllers again puts the Index ahead on another-level. The knuckles offer an ergonomic, comfortable fit by their design and feel great when throwing things such as grenades in Doom VFR. The WMR controllers whilst covering both bases by having a thumbstick and trackpad don’t have any regular A/B X/Y buttons which means a reliance on the trackpad for those functions. Certainly not as comfy to hold or use. A shame HP didn’t opt to redesign those for their headset. In the case of games such as PCARS 2 or Elite Dangerous, Xbox Gamepads or other peripherals come highly recommended.

The Valve Index is a great headset, perhaps one of the best on the market right now. It mostly covers all bases for the VR connoisseur and comes with a high-price of entry to suit. Its richer colours, great audio and low-persistence screens make for very immersive VR experience especially at 120hz and above. However, it’s a bit of beast in weight and suffers from unsightly godrays.

For pure raw-power when it comes to clarity the HP Reverb is king here without a shadow-of-a-doubt. The crisp image means the negatives aren’t as impacting or very easily ignored. It’s a shame the controllers and tracking solution feels somewhat dated. A revision of the controllers and more cameras might have helped here. However, for specific use-cases such as sim playing or seated gaming/desktop work it’s not an issue.

To conclude then, the Index offers a concise all-round high quality VR experience across-the-board. The Reverb on the other hand provides a no-nonsense visual assault on the eyes in terms of high quality clarity at the expense of everything else. If we’re to choose one over the other then the Index feels more refined all-things-considered and comes recommended above the Reverb. However, for the moments you require ultra clear visuals and if that’s most important to you then the Reverb is a must, no other VR headset comes close as of now.

Great review, I experienced it pretty much like you, although I only had 1 day with the reverb