Something special to celebrate the birth of modern VR (and vorpX) almost 10 years ago. What a ride. https://www.vorpx.com/wp-content/uploads/2021/12/vorpX_Cyberpunk_Mod.mp4

I have vorpx, i wonder if this mod requires a separate purchase? Edit: no it doesn’t, if u have vorpx u get the mod also.
Which mod, Lukes Ross’s or Ralfs, will be better!? A bit of competition is good.
It has geometry 3D and decoupled head look.
I’m getting Lukes mod even if Ralfs turns out pretty good next week.

Ive seen several people attempt to get CP2077 running on Vorpx and its not good.

I got around to trying GTA5 in Vorpx using its new Game Specific support. (Stanalone he calls it) It attempts to do the AFR technique. But It was nowhere near as good as @LukeRoss Mod

Vorpx made me ill after playing it for an hour.

I’m not saying Vorpx is bad. I love Vorpx The games that work well like Bioshock are amazing and I doubt they could be improved.

It seems that Ralf lately seems to be feeling competition from Luke, as he seems to have added “Stanalone mods” of games Luke has done or announced. This rivalry can only be good for us in the long run.

Must say though I like Vorpx pricing model much more.

I bought Vorpx once for $50 like 6 years ago and it has brought me much joy.

to get the current version.

Only issue is if there are fixes to existing games you will have to buy each time.

What would be nice is if @LukeRoss took a Semantic Versioning approach to the mod where Only new games would get a Major version number update but fixing existing would bump the Minor or Patch numbers.

Minor or Patch could be free for existing owners where Major versions would require a re-sub.

What do you think?

I’ve not played gta 5 with vorpx but i do believe lukes mod is better. I didnt know he called vorpx gta 5 and rdr2 “standalone”. I think there will actually be a standalone .exe with this ralfs cyberpunk mod? If its just vorpx, not a separate .exe, then i feel like i’ve been deceived!

Yes that charging structure would be better for lukes mods. Last night i was gonna pay 1 months patreon just for horizon mod but saw the renewal was jan 1st, so i’ll wait till then n get horizon and hopefully cyberpunk with 1 months patreon.

I’m intrigued by ralfs cyberpunk mod having decoupled head/walking movement though. I love to be able to stroll through a game world looking around freely without railroading to where i am looking.

by the past games,Luke’s mods are way better specially in the cutscenes department,with vorpx i get this ugly warp of the world feel meanwhile luke,s mod look like any VR native game,im not sure what you mean by decoupled head tough,if you mean walk around freely you can do that in luke s mod too the character will stay in place,i once chilled in the forrest in red dead 2 looking at the stars and arthur was next to me without a head lol

I think there will actually be a standalone .exe with this ralfs cyberpunk mod? If its just vorpx, not a separate .exe, then i feel like i’ve been deceived!

I’m not sure what you mean by this.

Basically when Ralf says standalone he means that the profile is more than just the standard generic injector he normally does.

The “standalone” profiles he actually has to do something similar to LukeRoss and hand tweak/program it to work and he uses the vorpx framework as the tool to get it to your eyes.

This in theory will provide much better results. I think he even goes into the games ini files and sets optimal settings when neccessary for you.

im not sure what you mean by decoupled head

@drowhunter i actually get the impression (i could be wrong) that ralfs cyberpunk mod will be a standalone executable as well as being part of vorpx (so it will come in 2 forms). In the thread on his forum he says the mod will be “free to everyone”…i dont see him giving vorpx away for free!?

In the thread on his forum he says the mod will be “free to everyone”…i dont see him giving vorpx away for free!?

Yeah, the way he worded that sounds weird. I left a comment on the forum asking what he meant.

“Yes, free and standalone means that it will be a separate, unpaid download. As a gift for vorpX’s 10 year anniversary.”

Very interesting, and great being free! He must be confident in it because after all, if it wasn’t good, it wouldn’t be a good advertisement for vorpx. Can’t wait to play both mods and compare, hopefully they’re both good.

“Yes, free and standalone means that it will be a separate, unpaid download. As a gift for vorpX’s 10 year anniversary.”

Seems my framerate issues were fixed but he didnt bump the version number for some reason, so I need to reinstall Vorpx to fix the bugs I was having and sickness.

This is good news because it means we are getting two cyberpunk VR mods within the span of a month.

Cyberpunk 2077 - The new VR-Mod! 6-DOF, Geometry 3D, for free! - YouTube i think its out?looks like AER i mean of course otherwise it wouldnt even be possible

in the video he says he has a nearly finished version so its not out yet but in the description it says release is 24th so tomorrow!

Edit: another vid of gameplay: 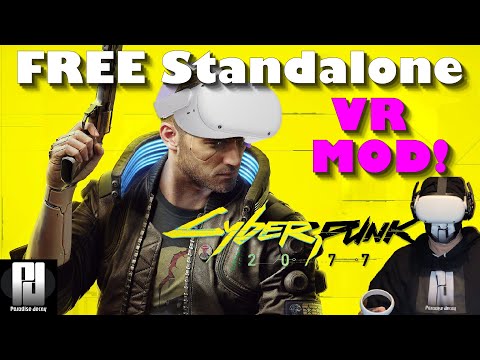 yes, but how do you know until you try the mod. It’s free to find out either way! I have the 8Kx and will grab it to compare against the Luke Ross one.

of course im gonna try it,i know just from the past,rn im playing hzd with lukes mod and its blurry af almost at 3000x3000 is getting playable that i can see something but the fps is low on potato fov and a 3080.i assume PP just zooms in the image to account for the canted displays because it cant increase the res as thats handled by the mod.

its out ive just tried it on my 8kx large fov. maybe its just my setup but it didnt run very well, got 50 fps on default settings which are low settings, i have a 3080TI.

theres like a heat haze effect around objects like npc’s in the game. also, the view is framed by a black border all the way around…kinda like watching it on a tv screen that moved with my head, immersion killing (i’m hoping this was just my setup).

Edit: the heat haze effect was cured by turning off Ray Tracing in the graphics options. Doing this and having mod setting on “Nicer” and its running at 72fps on my quest 2 which is the refresh rate.

Edit: the black border on 8kx is due to the mod not doing the 8kx’s full fov, Ralf suggests using Small fov in pitool. This will no doubt boost fps too.

its playable on q2 (not tested 8kx on small fov yet). bit juddery when turning with the right thumbstick. not bad for free

where did you get the mod from?i cant seem to find it on vorpx page,i also have vorpx but i cant see any new profile,just the old Z3D ones.
nvm found it in the comments

its actually pretty good on the 8kx,not too blurry i see CAS works with DLSS so it makes it sharp enough yeah i see the border even on small FOV but i think its because pimax big vertical FOV idk tho all in all looks great,now all i need is Ralf or Luke does witcher 3 like this too with the first person mod

its actually pretty good on the 8kx,not too blurry i see CAS works with DLSS so it makes it sharp enough